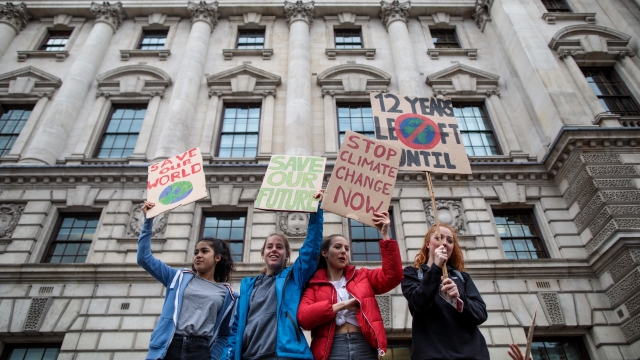 SMS
Students Around The World Protest Climate Change Inaction
By Caitlin Baldwin
By Caitlin Baldwin
March 15, 2019
Youth Climate Strike events were set to take place in more than 100 countries and territories, including almost every state in the U.S.
SHOW TRANSCRIPT

"Waters rise. Hear our cries. Do not let our planet die," students chanted.

Students all over the world skipped class Friday to protest inaction on climate change. They carried signs that read, "There is no planet B" and "School can wait but the environment can't."

In the U.S., students in almost every state took part in the rallies.

"The damage from climate change cannot be undone. And that is simply something I chose not to accept," another student said.

"We must rise up. We must vote elected officials out who put money above their people," another student said.

The protests come as pressure is increasing to back climate science and address what protest organizers call "our climate crisis."

In October 2018, the U.N. called for countries that are part of the Paris climate accord to take action to further restrict the rise in global temperatures. The U.S. pulled out of the accord last summer.

Senate Minority Leader Chuck Schumer applauded the student protests and called on Congress to take action on the issue.

"So we stand with all of you, the students of America, making your voices heard," Schumer said.