Students Across The Country Demand Action On Gun Reform 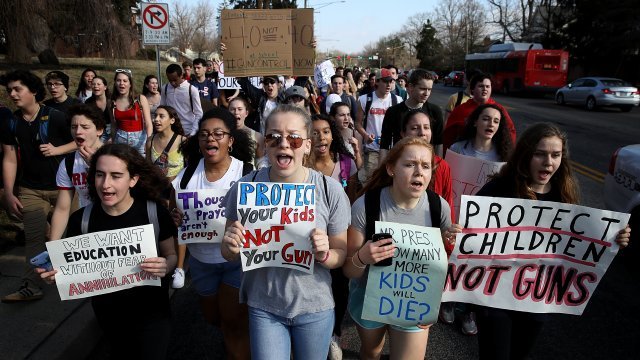 "The only thought on my mind is, 'I'm going to die,'" said Marjory Stoneman Douglas student Lorenzo Prado.

They were demanding lawmakers take action against gun violence.

"We want stronger mental health checks and background checks to work in conjunction we want a better age limit," said student Delaney Tarr. "We want privatized selling to be completely reformed so you can't just into a building with $130 and walk out with an AR-15."

The rally comes one day after the Florida House voted not to consider a bill that would ban assault weapons and high-capacity magazines.

It also comes exactly a week after a gunman killed 17 people at Marjory Stoneman Douglas High School. But it's not just Douglas students taking action.

Students across Florida walked out of their classrooms Wednesday to push for gun law reform. They were joined in their efforts by students across the country.

Some students at the Capitol say they were turned away by their representatives because meetings were "appointment only."

There may, however, be some forward motion. President Donald Trump is reportedly open to expanding age restrictions for purchasing certain types of guns. According to Axios, Trump said privately he doesn't think high school-aged kids should be able to buy guns and that he's in favor of banning sales of assault weapons to people under 21.

And a White House source reportedly told Fox News that Trump is in favor of raising the age limit for assault weapon purchases.