Student Debt Is Reshaping Lives — And The Campaign Trail 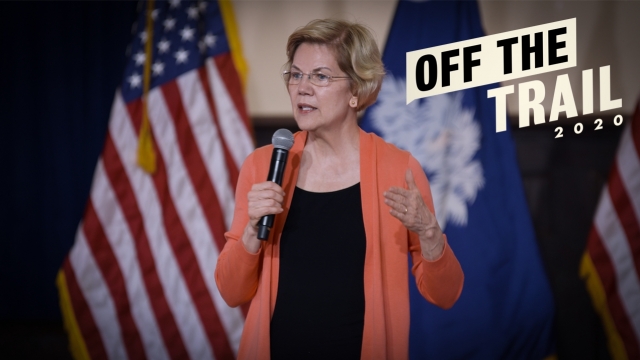 In the first episode of Newsy's 'Off The Trail' series, we unpack student debt plans from 2020 candidates and talk with Elizabeth Warren on her plan.

Can the student debt crisis be solved? That's one of the biggest questions on the campaign trail as candidates jump into the 2020 presidential race and roll out their plans on the issue.

In this first episode of Newsy's "Off The Trail" series, we hear from students and graduates struggling under the student debt crisis. And we unpack proposals from 2020 presidential candidates and talk with Sen. Elizabeth Warren on her plan.

Collegiate experts agree that a college degree is still generally worth the time and money.

For this report, Newsy partnered with Ipsos to shed new light on public opinion around student loans. The Ipsos/Newsy survey found that a majority of registered voters support some form of student debt forgiveness, with 85% of respondents who still carry debt saying they support forgiveness and 55% of respondents who had already paid off their student loan debt supporting the initiative.

The survey also gauged support from Democrats and Independents for a variety of policy ideas that have surfaced in the Democratic presidential primary. Student debt forgiveness is ranked as the fifth most important among those registered voters (15%), but among millennial and Generation Z Democrats and Independents (ages 18-38), student debt forgiveness is a top-tier policy issue (24%), alongside universal background checks for gun purchases (26%) and Medicare for All (28%).

Video editing and animation by Jennifer Smart, videography by Kevin Clancy and Kyle Pyatt and data reporting by Rosie Cima and Mark Fahey are included in this video.

More from Off The Trail

The American Conservation Coalition is hoping to prove it's not just Democrats who care about the environment.

Newsy takes a look at the rising cost of prescriptions and why some Americans are looking across the border for cheaper medicine in "Off The Trail."

Not Every Vote For President Counts The Same. Should That Change?

The Electoral College is a messy system. Now, talk of reform is sweeping across the campaign trail. Our "Off The Trail" series takes an in-depth look.