Student Comes Out To Obama During UK Town Hall 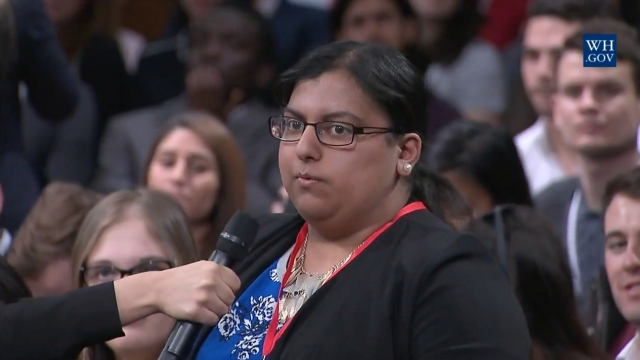 It's not every day someone comes out to President Obama at a town hall. But a college student did just that during the president's U.K. visit.

"Now, I'm about to do something terrifying, which is, I'm coming out to you as a non-binary person," Maria Munir said.

They brought up North Carolina's "bathroom law" — which says transgender people must use bathrooms based on the sex on their birth certificates.

"Perhaps you could elucidate as to what you can do to go beyond what has been accepted as the LGBTQ rights movement in including people if they're outside the social norms," Munir said.

This isn't the first time Obama's had to address LGBTQ issues during his visit. Legislation in North Carolina and Mississippi that opponents argue is discriminatory to LGBTQ people came up earlier in the week.

"I want everybody here in the United Kingdom to know that the people of North Carolina and Mississippi are wonderful people; they are hospitable people; they are beautiful states. ... I also think that the laws that have been passed there are wrong," Obama said.

After the legislation passed, the U.K. issued a travel advisory warning LGBTQ citizens planning on visiting the U.S.

This video includes images from Getty Images and WSOC.