US Auto Industry Still Struggling To Adapt To Changing Demands 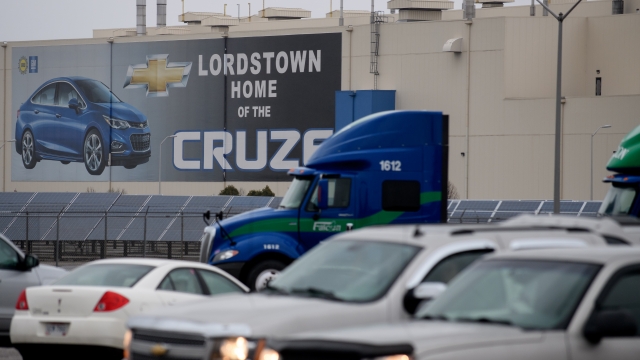 Some US automakers have continued to struggle in recent years despite President Donald Trump's efforts to encourage companies to ramp up production.

"Many people attribute this mostly to market changes, slowing demand in the U.S. and China and slow demand for cars like the Cruze small sedans as opposed to big SUVs which people seem to like much more," said Mark Muro.

U.S. automakers have tried to cope with changing consumer tastes and increased foreign competition over the past few decades. Now, there's another big hurdle on the horizon for the industry. Despite increased overall sales of vehicles in 2018, GM and Ford saw decreased sales of sedans.

"The biggest factor is fundamental changes in the industry, the move from gas to electric is changing what needs to be built and who needs to be building it," Muro added.

Mark Muro is a senior fellow at Brookings he says the US auto industry is doing well after recovering from financial crisis in 2008 but the President has sent mixed messages.

"Trump has tended to browbeat executives for moving things around and for not creating enough jobs and he's given tax cuts he's argued would help the bottom line and made a lot of tariff threats, some of which have actually hurt these companies," Muro said. "By increasing costs for steel and aluminum."

The closure of a General Motors vehicle assembly plant this week could indicate a major shift. GM is planning to close its plant in Lordstown, Ohio, along with three other U.S. factories. The move will put thousands of people out of work.

The plant's closure has sparked political push back. Senator Rob Portman said in a statement to Newsy which reads in part: "I'm not giving up on this plant and these workers....I will continue to push GM to do the right thing, and that is bringing one of [the] 20 new electric vehicles it plans to produce by 2023 to Lordstown."

The push for electric vehicles could possibly save companies like GM from mistakes of the past.

"Prior to the great recession the auto companies were not making the right sorts of products and their businesses were in near disarray and that we had a near death situation on the American auto sector," Muro said. "Hopefully we will have learned something in the last decade in which this industry got back on its feet. With a lot of support from government"

Experts say the government can help keep the auto industry growing by focusing on tools that would increase innovation and by maintaining a national fuel efficiency standard. The White House has previously said it would plan to roll back those standards aiming to make vehicles cheaper starting in 2021.