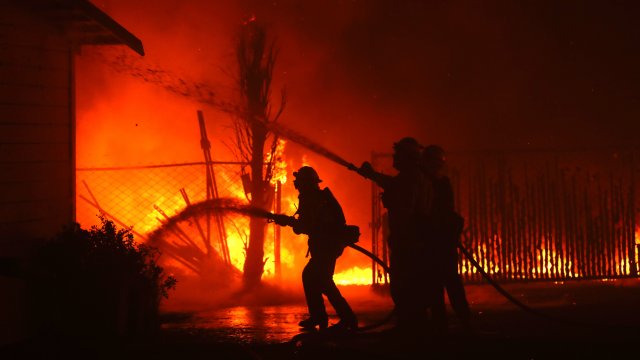 Large parts of the state were under red flag warnings Wednesday, meaning an increased risk of fire danger.

As multiple wildfires continue to burn in Northern and Southern California, officials are bracing for dangerous weather conditions that could fuel the flames even further.

On Wednesday, large parts of the state were under red flag warnings. The National Weather Service issues those warnings when warm temperatures, very low humidity and stronger winds are expected create an increased risk of fire danger.

That risk is even greater for Southern California thanks to the Santa Ana winds that are expected to whip through the area. Forecasters are predicting wind gusts of up to 80 mph in some places — some of the strongest in recent memory.

That's not the news firefighters were hoping for as they continue to battle blazes across the state.

As of Wednesday morning, the Kincade Fire in Sonoma County had scorched nearly 77,000 acres, destroyed more than 200 structures and was only 30% contained.

The Tick Fire in Los Angeles County had burned about 4,600 acres, destroyed 22 structures and was 94% contained.

Also in Los Angeles County, the Getty Fire had singed nearly 750 acres, destroyed 12 residences and was 27% contained. Thousands of structures are in mandatory evacuation zones.

And the newest blaze, the Easy Fire, had scorched approximately 1,300 acres by Wednesday morning. It threatened 6,500 homes and structures, including the Ronald Reagan Presidential Library in Simi Valley.

Thousands of local, state and federal personnel are assisting with the fires. Gov. Gavin Newsom said the state is "deploying every resource available, and are coordinating with numerous agencies as we continue to respond to these fires."