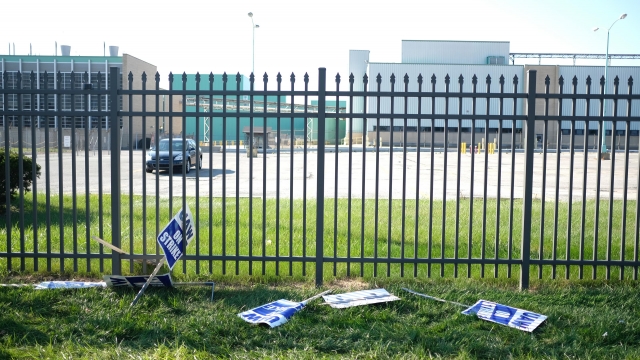 "Leadership was rewarded and society benefited in countless ways. GM designers and engineers captured the spirit of the times in Motorama concept cars that anticipated what customers might want and need to travel farther, safer and smarter than ever before."

This is how General Motors has sold itself to the world - as a pioneering American car company with its eyes optimistically fixed on the future. But amid a four-week walkout by nearly 50,000 workers, GM's immediate future is decidedly more tense and downbeat.

A new economic analysis says GM will lose $1.1 billion in income if the strike that has shuttered 34 U.S. assembly and parts plants isn't settled by this weekend.

On Friday, GM made a direct appeal to those workers, in an end-run around the union. It came in a letter from executive vice president Gerald Johnson.

"Dear General Motors Employees," he wrote. "All of us in the GM family have been impacted by this strike. The strike has been hard on you, your families, our communities, the Company, our suppliers and dealers. The speculation in the media for four weeks adds to the uncertainty."

He said the company has offered workers improved compensation and benefits and enhanced profit sharing, but said: "It's critical that we get back to producing quality vehicles."

But UAW vice-president Terry Dittes said this week that negotiations "have taken a turn for the worse."

The union is pushing GM to increase auto production in the U.S. after the company closed four American plants last year. It wants more jobs moved back to America from plants in other countries.

While GM's foreign workers aren't on strike, it's had an impact on them as well. Parts shortages have closed two assembly plants in Canada and Mexico. And industry analysts say six other foreign plants may be next.