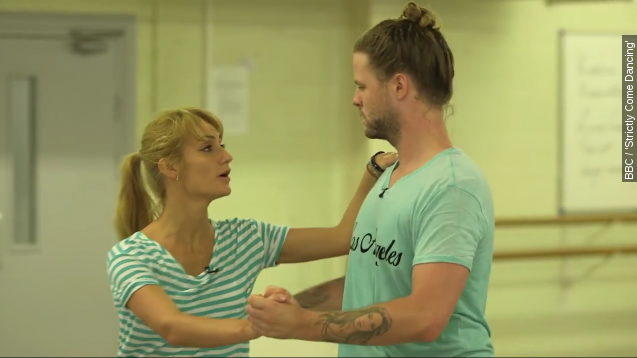 Yet another scandalous rumor has surfaced about "Strictly Come Dancing" stars Aliona Vilani and Jay McGuiness.

Barely a week after McGuiness denied speculation that he and Vilani are romantically involved, an anonymous source told The Sun the pro dancer "hit the roof" after she learned he was texting fellow female contestants on the show.

According to the source, "She's gone on the warpath against these girls and the BBC are worried about a catfight. She also hit the roof when he chatted to a girl in the bar by his hotel."

McGuiness and Vilani were first romantically linked after they were spotted getting cozy outside the Pride of Britain awards last month.

But the former Wanted singer shut those relationship rumors down in a recent interview with OK! magazine, saying, "I’m not going to let them bother me and neither are Aliona and her husband." (Video via Universal Island Records / The Wanted)

And it looks like they aren't letting the murmurs affect their dancing, either. The couple's Little Red Riding Hood-inspired Halloween routine earned them a second place spot in the competition. (Video via BBC / "Strictly Come Dancing")

Vilani has been married to husband Vincent Kavanagh since 2014. She has yet to comment on the rumors.