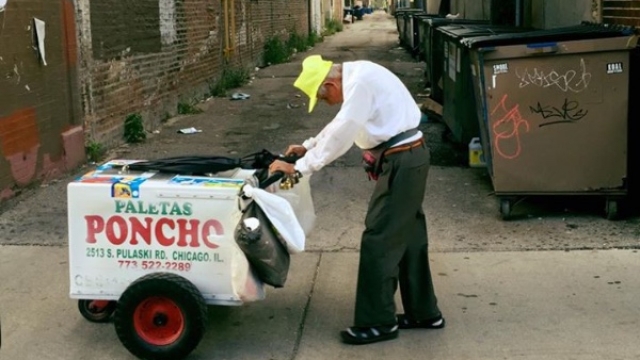 They say a picture is worth a thousand words.

But this photograph turned out to be worth much more than that for someone who truly needed some help.

"My name is Fidencio, and I sell popsicles daily," Fidencio Sanchez told CNN.

Fidencio Sanchez, 89, has been selling ice cream and popsicles in Chicago's Little Village neighborhood for more than 20 years.

According to local station WGN-TV, he leaves a restaurant each morning with about 200 frozen treats in his 50-pound cart.

He was finally starting to ease up on his hours when his daughter, who helped support both he and his wife, died in June.

But last week, a good Samaritan was heartbroken when watching Sanchez struggling to push his heavy cart down the streets of Little Village.

After buying 20 popsicles from Sanchez and giving him $50, the kind stranger posted about Sanchez on Facebook.

One of them even started a GoFundMe page for the Sanchez family that had collected over $270,000 as of Tuesday afternoon.

The post was almost immediately flooded with commenters who also wanted to lend a helping hand.

Sanchez told local reporters he is "very grateful and very helpful" for all the support during the past few days. The GoFundMe campaign will continue to accept donations through the end of the week.