The Real Culprit Behind The Common Cold Might Be ... Camels? 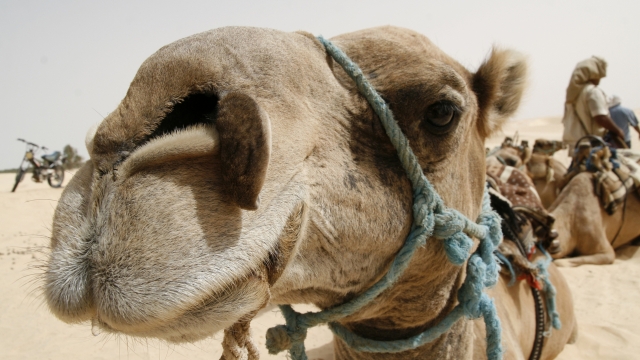 SMS
The Real Culprit Behind The Common Cold Might Be ... Camels?
By Lindsey Pulse
By Lindsey Pulse
August 18, 2016
A team of researchers found traces of the common cold in 6 percent of the animals studied.
SHOW TRANSCRIPT

The next time you come down with a cough or a sneeze, you might think twice before blaming it on cold, rainy weather. The true culprit might be ... camels.

The National Academy of Sciences published a study that found one strain of the common cold virus actually originated in the desert animals.

SEE MORE: How A Hybrid 17th Century Camel Skeleton Ended Up In Austria

A team of researchers tested about 1,000 camels for coronaviruses and found the common cold virus in around 6 percent of those studied.

And that's not the only disease linked to them — camels have also spread the Middle East respiratory syndrome, which is often fatal to humans.

The first cases of MERS were identified in humans in 2012. The World Health Organization reports more than 600 people have died from the virus since then.

SEE MORE: So You Caught A Cold: Why Staying Warm Is Still Your Best Defense

Researchers are developing a vaccine for MERS, and clinical testing is expected to begin early next year.

The researchers say unlike that strain of the common cold, MERS hasn't adapted enough to spread globally. But they note that if it does, it could be serious, especially when you take into consideration how rapidly the common cold is passed around.