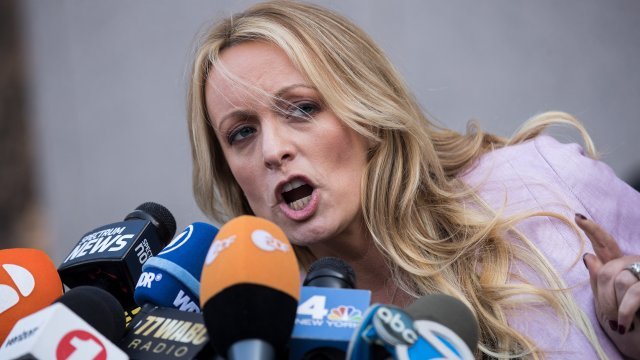 Stormy Daniels is suing the president after he dismissed her claim that she was threatened to stay quiet about their alleged affair.

Stormy Daniels has filed another lawsuit against Donald Trump.

The lawyer for the adult film star announced his client filed a defamation suit against President Trump. The suit argues the president made a false statement to "denigrate and attack" Daniels.

The litigation focuses on a tweet from Trump on April 18. He quote-tweets a sketch of the man who allegedly threatened Daniels to stay quiet about her alleged affair with Trump. The president writes "total con job" and says this man does not exist.

Daniels is seeking upward of $75,000 in damages in this lawsuit. She's already suing Trump to get out of her nondisclosure agreement and has a separate defamation suit against Trump's attorney Michael Cohen.