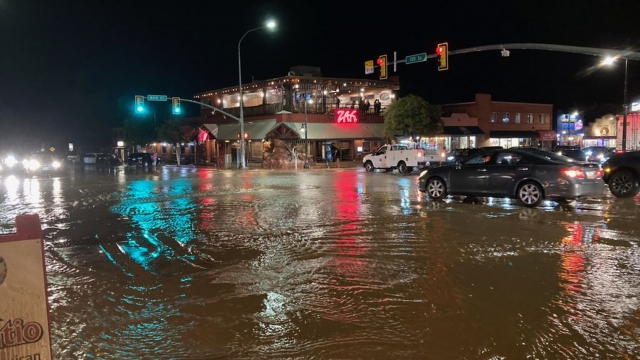 Across massive swaths of the South, heavy rains are prompting flooding and flash flooding.

From the high deserts of Arizona and New Mexico to the swamps of Louisiana, storms are dumping inches of rain, on ground in no shape to absorb all that water.

"We're going for periods of a long time without rainfall, and then bang — we'll get periods of very intense rainfall and flooding," said David Feldman, professor of urban planning and public policy at the University of California Irvine.

In Utah, a hiker was swept away after walking into the narrows of Zion National Park and apparently getting caught in a flash flood. A spokesman said the park received reports of multiple people being "swept off their feet" in a flash flood.

In Phoenix, Arizona, residents spent the weekend sandbagging their homes. And in Dallas, Texas, Brittany Taylor waded through her brand new apartment to find ruined belongings.

The rains are expected to last for days as a high pressure system parks over the northern states, pushing storms into the South and Southwest.

"Monsoon rains are important, a very important part of the ecosystem in the American Southwest," said Brad Rippey, USDA meteorologist. "However, they tend not to greatly boost soil moisture or reservoir storage."

But now climatologists at UCLA have found an increasing risk of a California megastorm — one that would deluge cities and towns over the course of a month and test the state’s dams and runoff instrastructures.

The odds are already one in 50 every year, and getting worse as the amount of greenhouse gas humans put into the atmosphere increases.

That means dealing with this is just part of the new reality.