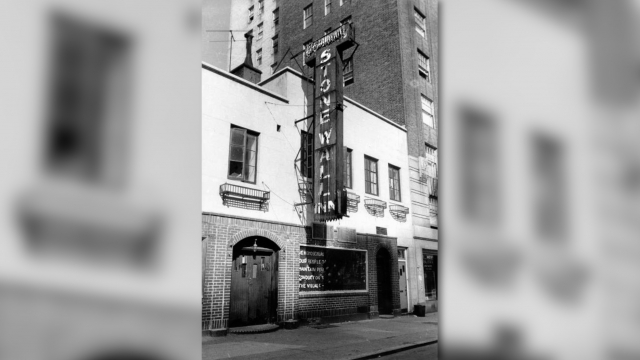 June is LGBTQ Pride month. It's marked across the country with parades and other events. But what do you know about the catalyst for the the modern-era LGBTQ rights movement?

On June 28, 1969, Manhattan's Stonewall Inn — a place frequented by gay men, lesbians and transgender people — was raided by police early in the morning. Law enforcement regularly raided the bar, even though it was owned by the mafia, which paid off local police.

For some quick context, in the 1950s and '60s, homosexuality — more specifically, homosexual acts — was illegal in almost every U.S. state. Penalties could be as harsh as a life sentence in prison. Few businesses let in people who were openly gay, and those that did were often bars. In New York, until 1966, authorities shut down many places that served alcohol to anyone known or thought to be an LGBTQ individual.

At the time of the Stonewall riots, many bars were still operating without liquor licenses. And engaging in so-called "gay behavior" — like holding hands or kissing — was still illegal.

When police raided the Stonewall Inn on June 28th, they assaulted customers and arrested 13 people — some for illegally selling alcohol, others for violating New York's gender-appropriate clothing statute.

But, unlike past raids where bar patrons scattered, they stayed and gathered outside. Some even started fighting back, throwing objects at law enforcement while they tried to put those arrested into police vehicles. Some police officers, prisoners, and even a writer for a local newspaper barricaded themselves inside the bar. Protesters tried getting inside, and later set the building on fire. The violent protests and clashes lasted nearly a week.

"Over the past seven years, we've seen achievements that would have seemed unimaginable to the folks who — knowingly or not — started the modern LGBT movement at Stonewall," the former president said at the time.

And in June 2019, an interactive monument — called Stonewall Forever — went up, but it's not a physical monument. It's a monument you can visit online, anywhere in the world. It aims to tell the stories of the people who were part of the Stonewall riots, those who helped pave the way for the modern movement.