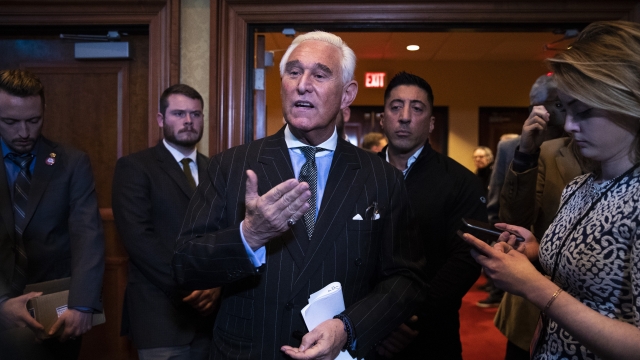 SMS
Roger Stone Says He Hasn't Ruled Out Cooperating With Special Counsel
By Katherine Biek
By Katherine Biek
January 28, 2019
Stone told ABC's "This Week" that he would "testify honestly" if he knew of "wrongdoing by other people in the [Trump] campaign."
SHOW TRANSCRIPT

Former Trump campaign adviser Roger Stone said Sunday that he has yet to rule out the possibility of striking a deal with federal prosecutors.

When asked about possibly cooperating with special counsel Robert Mueller's probe on ABC's "This Week," Stone said, "If there's wrongdoing by other people in the campaign that I know about, which I know of none, but if there is, I would certainly testify honestly."

Stone also said he'd "testify honestly" about "any communications with the president," describing their phone conversations as "political in nature" and "benign."

Stone's comments came just days after he was indicted by a grand jury on seven counts, including making false statements, witness tampering and obstruction of an official proceeding.

Mueller's team alleges that Stone was in contact with WikiLeaks during the campaign, largely through a person serving as an intermediary. That's the site that published a bunch of emails that were stolen from Democrats by Russian agents during the 2016 election.

The indictment also alleges he provided the Trump campaign with advance knowledge about "potential future releases of damaging material."

Stone already said he plans to plead not guilty during his arraignment Tuesday.