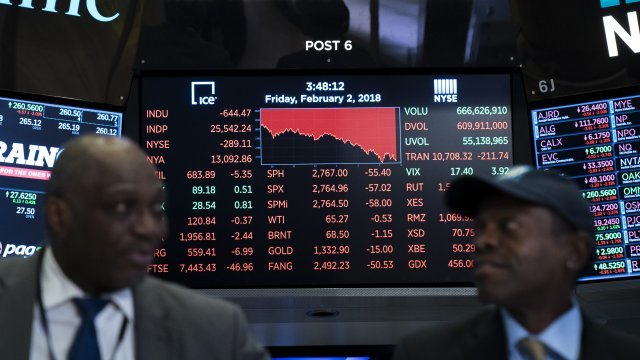 By Bianca Facchinei
October 8, 2018
The president frequently references it even though it doesn't mean anything to half the population.
SHOW TRANSCRIPT

Ever since he got to the White House, President Trump has claimed America's economy is booming — especially when it comes to the exchanges.

"The stock market is at an all-time high in history," Trump said when addressing the United Nations in September.

In fact, he references the stock market quite a bit. While it's true that we've seen record highs during his administration, most Americans aren't directly benefiting from them.

According to the St. Louis Federal Reserve, only half of the country has any exposure to the market at all. What's more is nearly 83 percent of the wealth is owned by the richest 10 percent of households.

So even though the stock market continues to be a talking point for Trump and his supporters, it's not something most voters will cling to as they head to the polls this November. In fact, it's never been a major political issue.

Under President Obama, we actually saw greater stock market growth in the first 21 months of his term than we have so far under Trump. With the exception of President George W. Bush, all administrations going back to President Ronald Reagan saw triple-digit percentage increases. But it's important to consider that each presidency experienced different headwinds, making it difficult to compare the numbers.

So while the market won't be a top-tier issue among voters in this year's midterms, the greater economy will be, as it typically is. Between the tax bill and tariffs, the results could be seen as a referendum on Trump's economy policy — regardless of how high or low the Dow jumps.