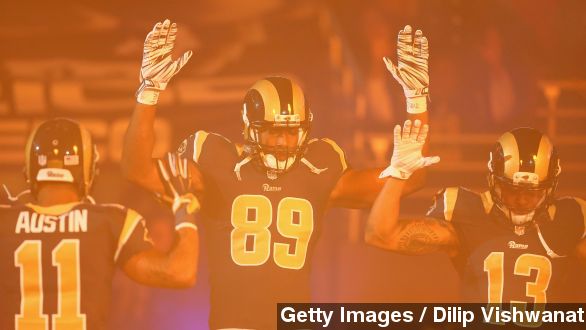 The St. Louis Police Officers Association has condemned the actions of several St. Louis Rams players who made the "hands-up, don't shoot" pose during team introductions prior to Sunday's football game — an apparent gesture showing support for Michael Brown and Ferguson protestors.

The SLPOA released a statement that reads, in part, "[We're] profoundly disappointed with the members of the St. Louis Rams football team who chose to ignore the mountains of evidence released from the St. Louis County Grand Jury this week and engage in a display that police officers around the nation found tasteless, offensive and inflammatory."

The statement also demands the players involved be disciplined — that is, Tavon Austin, Jared Cook, Stedman Bailey, Chris Givens and Kenny Britt — and called on the Rams and the NFL to issue a public apology as well.

Despite the SLPOA's disapproval, the players involved say the gesture was about solidarity and showing support for their community and not about "taking sides" on the issue.

"Taking sides? No, we're over here. We want to show that we over here for a great cause. That something positive comes out of it." Chris Givens told KTVI.

"We help build up the people around this community daily and weekly by visiting schools and talking to kids. So, coming out and showing that we unified with the rest of them was key to us," Jared Cook told KMOV.

KMOV says Austin and Bailey mirrored those sentiments, saying, "We understand that it was a big tragedy and we hope something positive comes out of it. ... There's a lot of violence around St. Louis and we just want it to stop."

Sunday's matchup against the Oakland Raiders was the Rams' first game since a grand jury cleared Officer Darren Wilson of all charges in the shooting death of unarmed teenager Michael Brown.

This decision sparked mass protests around the St. Louis area — both peaceful and violent — and demonstrations extended to cities throughout the country.