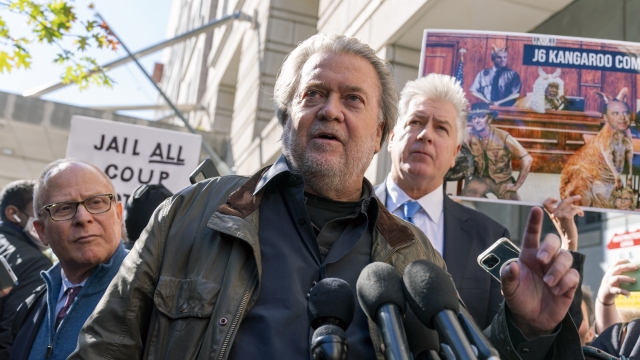 A judge sent Steve Bannon home Friday despite sentencing him to four months in prison for his contempt of Congress charges.

District Judge Carl Nichols sentenced the former adviser to President Donald Trump and added a $6,500 fine Friday morning. Nichols said the law was clear that contempt of Congress is subject to a mandatory minimum sentence of at least one month behind bars. Bannon was allowed to leave the courthouse after his sentencing pending a "timely" appeal.

The sentence was well below the six months and $200,000 fine requested by the prosecution for "his sustained bad faith." Bannon's lawyers asked for probation, once again staking their case on executive privilege.

Bannon was convicted in July of two counts of contempt of Congress for not cooperating with the House's select committee investigating the attacks on Jan. 6.

The panel wanted to speak with him about the events leading up to that day.

"All hell is going to break loose tomorrow," Bannon said. "We're on the point of attack tomorrow. I'll tell you this, it's not going to happen how you think it's going to happen, and all I can say is strap in."

The longtime Trump ally criticized the Justice Department and looked ahead to midterms as he left the courthouse.

"On Nov. 8, there's going to have judgment on the illegitimate Biden regime and quite frankly, on Nancy Pelosi and the entire committee," Bannon said.

Bannon still has not provided any information to the committee.

"Steve Bannon is one of a handful people who just blew us off, and he's been convicted for contempt of Congress," Jamie Raskin said.

The clock is ticking for the Jan. 6 committee, as Republicans are expected to take over the House and shutdown the committee in January.