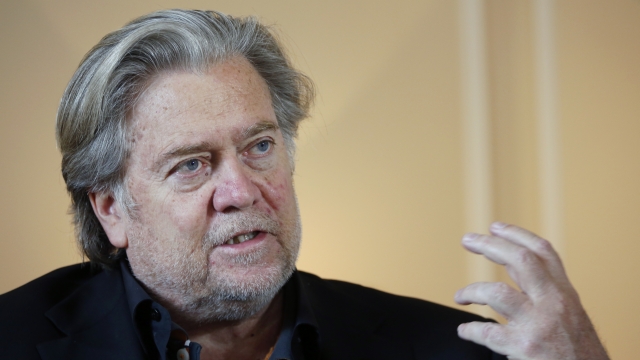 Steve Bannon pleaded not guilty to federal fraud charges. The former White House adviser was arrested and taken into custody at 7 a.m. Thursday by U.S. Postal Service agents. Bannon, at the time, was on a yacht.

He and three others are accused of pocketing hundreds of thousands of dollars from donors to "We Build The Wall," an online crowdfunding campaign which promised to raise funds for a southwest border barrier.

Instead, the indictment states Bannon spent some of the donations on travel, hotels and credit card debt.

"This case should serve as a warning to other fraudsters that no one is above the law, not even a disabled war veteran or a millionaire political strategist," said Philip R. Bartlett, inspector-in-charge of the New York Division at the U.S. Postal Inspection Service, in a statement announcing the charges.

"It's a very sad thing for Mr. Bannon. I think it's surprising," President Trump said Thursday of the charges.

President Trump tried to distance himself from Bannon and the fundraising effort.

Bannon led the 2016 Trump campaign three months before the election. He went on to become a chief White House strategist — a post he held just six months.

Bannon is the latest person close to the president to face criminal charges.

"It's Roger Stone. It's Michael Flynn. It's Rick Gates, Paul Manafort, Michael Cohen," a reporter told the president Thursday at the White House, referring to other members of his inner circle who have been either charged or convicted of various crimes.

"Well, I have no idea," replied the president.

He went on to criticize the Obama administration.

Prosecutors say Brian Kolfage, a disabled veteran and Trump adviser, used the money to buy a boat, SUV and cosmetic surgery. He previously pledged to never take a cent from the group.

"We were good stewards to the money, and we built the wall; we followed through on every promise," Kolfage said.

The four men are charged with conspiracy to commit fraud and money laundering. Each charge carries a maximum penalty of 20 years in prison.