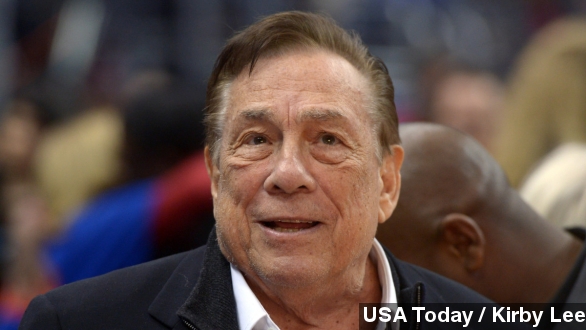 By Christian Bryant
June 4, 2014
Donald Sterling's lawyers made the announcement Wednesday, saying they would sell the team to Steve Ballmer and drop all other legal disputes.
SHOW TRANSCRIPT

The scandal that began more than a month ago involving Donald Sterling and the L.A. Clippers seems to have reached its conclusion: Sterling and his wife Shelly have agreed to sell the NBA franchise to former Microsoft CEO Steve Ballmer for $2 billion.

NBC reports Sterling's lawyers made the announcement late Wednesday, adding, "All disputes and outstanding issues have been resolved."

Those outstanding issues are most likely referring to the tug-of-war between Sterling and the NBA that has played out in the media over the past few weeks.

Just last week, Sterling threatened to sue the NBA for $1 billion because of his lifetime ban, which was handed down after recordings surfaced of the former franchise owner making disparaging remarks about black people. (Via CNN)

That threat came after his wife Shelly had agreed to sell the team to Ballmer for the aforementioned $2 billion. (Via Microsoft)

ESPN's Darren Rovell said in a tweet that Wednesday's announcement is a "huge victory" for the NBA, seeing that they have no pending legal issues with Sterling.

Neither Steve Ballmer nor the NBA have commented on when the sale will be finalized.