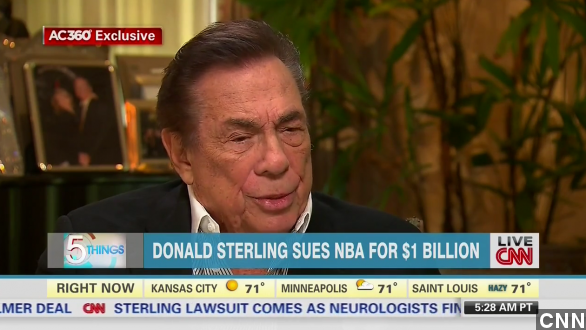 By Briana Koeneman
May 31, 2014
The Los Angeles Clippers owner says he never violated the NBA's constitution and that his infamous audio recording was captured illegally.
SHOW TRANSCRIPT

Disgraced Los Angeles Clippers owner Donald Sterling made it crystal clear Friday — he's not backing down anytime soon in the fight for his share of the team.

"Donald Sterling is now suing the NBA for $1 billion. The L.A. Clippers owner says he's taking the league to court because of the decision to ban him for life and force him to give up the franchise.​" (Via CNN)

CNN obtained a copy of the lawsuit from Sterling's attorney. The suit claims Sterling never violated the NBA's constitution and that the audio recording of him making racist comments was illegally obtained.

Sterling's lawsuit came as a surprise to many, especially after his estranged wife, Shelly, just negotiated a deal to sell the team for $2 billion to former Microsoft CEO Steve Ballmer. (Via Los Angeles Times)

The league's executive vice president and general counsel told ESPN Friday, "Mr. Sterling's lawsuit is predictable, but entirely baseless. ... Since it was his wife Shelly Sterling, and not the NBA, that has entered into an agreement to sell the Clippers, Mr. Sterling is complaining about a set of facts that doesn't even exist."

So, does Donald Sterling stand a chance against the NBA? The answer might have more to do with his mental health than the racist comments that got him into this mess in the first place.

Earlier this week, two neurologists with the Sterling family trust reportedly determined Sterling is mentally unfit to make decisions related to the trust — including the sale of his 50 percent share of the Clippers. (Via USA Today)

Sterling's attorney told CBS the diagnosis is a "vast overstatement" and claimed the 80-year-old only has a "modest mental impairment."

But regardless of his mental health, many are asking — Why would Sterling sue the NBA for the same amount of money he would otherwise receive if and when the team is sold?

"He may be trying to clear his name, maybe he's trying to use this as leverage, perhaps. Hey, lift the lifetime ban. I want to go to games. But then, I'll throw this other suit away." (Via CBS)

Donald Sterling bought the Clippers for $12 million back in 1981. If the sale to Steve Ballmer goes through, it will come at a price almost four times as high as anyone has ever paid for an NBA team.