Sterling Out, Ballmer In: The Future Of The Clippers 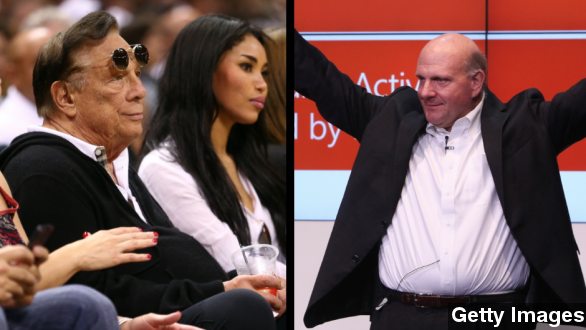 SMS
Sterling Out, Ballmer In: The Future Of The Clippers

By Danny Matteson
August 12, 2014
Steve Ballmer officially became the owner of the Clippers after a California court confirmed the authority of Shelly Sterling to sell the team.
SHOW TRANSCRIPT

It's finally over. The summerlong saga surrounding Donald Sterling's racist comments and family infighting ended Tuesday — with court approval of the sale of the Clippers to former Microsoft CEO Steve Ballmer.

BLOOMBERG: "Some breaking news: We have just learned that Steve Ballmer is now the proud owner of the Clippers."

Ballmer officially became the owner of the Clippers after a California court confirmed the authority of Shelly Sterling, Donald's estranged wife, to sell the team. (Video via The Verge)

Donald Sterling had been challenging that authority after he was found mentally incapacitated in late May. That ruling deemed him unfit to negotiate the sale of the team. (Video via CNN)

And, of course, all that drama stemmed from a leaked recording in late April of Sterling making racist comments to then-companion V. Stiviano — comments that led to the NBA imposing a lifetime ban on Sterling.

Now that the dust appears to finally be settling, though, what does the future look like for the Clippers?

​​Well, many are saying it's looking pretty bright. With the team now out of Sterling's hands, it avoided potential boycotts by championship-caliber head coach Doc Rivers and a point guard many consider to be the best in the league, Chris Paul.​

Not only that, but they might also have changed the culture of a team that until only recently was a perennial cellar dweller.

As USA Today notes, Sterling has faced accusations of tanking — or losing on purpose to secure higher draft picks — in the past.

And multiple sources have pointed out Sterling has a history of racist comments and actions.

The subtraction of Sterling aside, the addition of Ballmer will likely be positive as well.

A writer for SBNation points to Ballmer's enthusiasm. "For starters, he's not Donald Sterling -- and that is a huge advantage right there. … He was often referred to as the Chief Executive Cheerleader at [Microsoft] -- all those high fives and fist pumps … will fit right in on the sidelines at STAPLES Center."

He also follows the model of another NBA owner to come from the tech world, Dallas Mavericks owner Mark Cuban — who has won one championship with the Mavericks since taking over in 2000.

Ballmer spent $2 billion on the Clippers, initially reaching a deal in late May. He told the Los Angeles Times: "I've got big dreams for the team. … I'd love the Clippers to be the most dynamic, vibrant team and name in professional sports.”