How The Death Of Stephon Clark Galvanized California Lawmakers 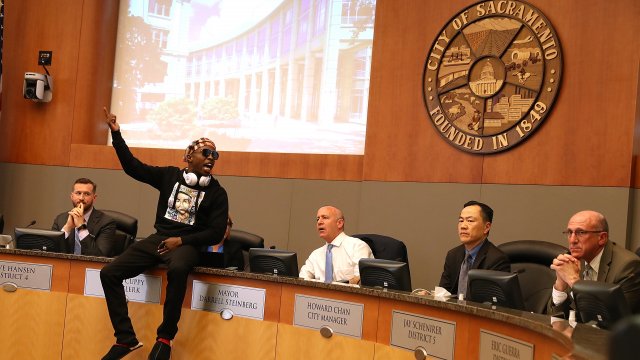 "I think that if you weren't in Sacramento or in California when Stephon Clark was killed, it might be hard to understand how much of a galvanizing moment that was," Abbie VanSickle, staff writer at the Marshall Project, said.

Sacramento Mayor Darrell Steinberg said: “This is not just about the death of Stephon Clark. We recognize that there have been other lives lost who also drive your grief and passion for change. You will be heard.”

More than a year later, in August 2019, the state responded.

“We are doing something today that stretches the boundaries of possibility and sends a message to people all across this country that they can do more and they can do better to meet this moment in their respective states,” California Gov. Gavin Newsom said.

Newsom signed into law some of the strictest standards for police use of force.

Why did this loss of life spark changes? Abbie VanSickle from the Marshall Project spoke with Gov. Newsom about this. He said it was a combination of forces. Location: “It happened in the state capital,” VanSickle said. Black Lives Matter protests: "People closed down streets and they marched and really kept on the pressure after this shooting.” And the inability to turn a blind eye: "Because it happened where lawmakers were and where they could see the impact, that's one of the reasons that this particular incident was so, so galvanizing,” VanSickle said.

California assembly member Shirley Weber spearheaded the bill. "The public’s activism for the last few weeks and their energy has truly been inspiring. It is time now that we as legislators match that energy, and do the right thing by pushing for smart and effective reform," Weber said.

Her and other lawmakers’ efforts have the potential to set a national standard. "Because as California goes, so goes the rest of America,” Newsom said.

“There's been some across-the-board push for wide reforms in California, and many of those ideas have spread to other states."  VanSickle said. "And so I think that lawmakers see themselves as setting the national standard, and then sort of watching it unfold in other states."