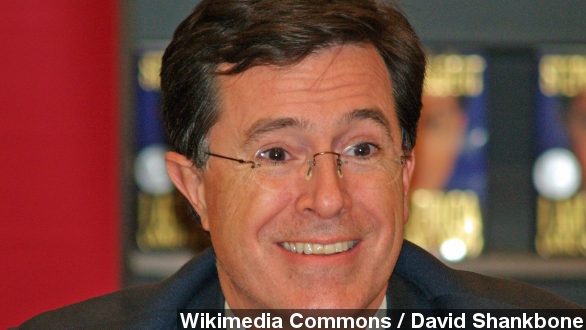 By Briana Koeneman
April 10, 2014
Well, that was fast. Stephen Colbert has been selected to take David Letterman's place as host of the "Late Show."
SHOW TRANSCRIPT

Well, that was fast. It's official  — Stephen Colbert has been selected to take David Letterman's place as host of the "Late Show."

The network said in a statement obtained by Entertainment Weekly: "Stephen is a multi-talented and respected host, writer, producer, satirist and comedian who blazes a trail of thought-provoking conversation, humor and innovation with everything he touches. We welcome Stephen to CBS with great pride and excitement."

According to CBS, Colbert is being given a five-year deal starting in 2015, once Letterman leaves the show for good. An exact date is still unknown. (Via CBS / "Late Show")

The timing did seem pretty perfect — Colbert's contract to host "The Colbert Report" on Comedy Central is reportedly up at the end of 2014, which would free him up to take on another project. (Via Wikimedia Commons / David Shankbone)

But taking on the role of late-night host could be an adjustment for Colbert. Just look at his statement about the news.

"I'm thrilled and grateful that CBS chose me. Now, if you'll excuse me, I have to go grind a gap in my front teeth." (Via OWN / "Oprah's Next Chapter")

That's the Colbert we all know and love.

But as Mashable pointed out before the announcement, Colbert will have to leave behind the "pseudo-conservative persona he's cultivated at 'The Colbert Report' and just be himself. ... He has stepped out of character on rare occasion, though not on his show.​"

Here's a glimpse at one of those rare moments from Talking Points Memo TV:

"It's wonderful to see you out of character."

"Thank you very much.  No guarantee that I'm out of character right now because I might prove myself an idiot."

But Colbert wasn't the only one in the running for the "Late Show" position. Other names that reportedly came up as possible replacements included Neil Patrick Harris, Craig Ferguson and Jon Stewart. (Via Wikimedia Commons / David Shankbone / Gage Skidmore, U.S. Department of Defense)

So how do you think Colbert will do in his new role as late-night host? Would you rather have seen someone else in the spot? Tweet us with your thoughts.