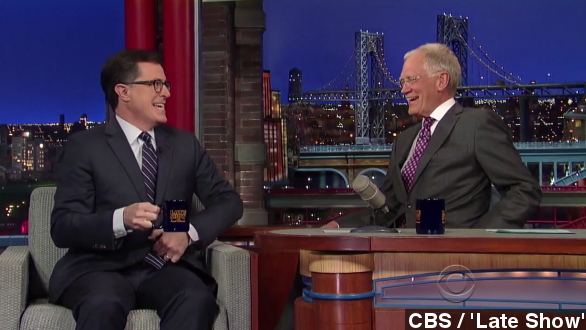 By Briana Koeneman
April 23, 2014
Stephen Colbert stopped by the "Late Show" Tuesday for the first time since NBC announced he'll be taking over as the show's host next year.
SHOW TRANSCRIPT

CBS' new kid on the block Stephen Colbert dropped by the "Late Show" Tuesday night to give the audience a taste of what they'll be getting when he takes over as the show's host in 2015.

"You look right at home."

"Thank you very much."

"They could have just as easily hired another boob like me. But they didn’t, they hire a guy — "

This was Colbert's first visit to the "Late Show" set since the network named the Comedy Central funnyman as David Letterman's successor when he retires in 2015. (Via Comedy Central / "The Colbert Report")

And it was a fairly funny one. The two lightheartedly joked about some pretty tame subjects, including dogs and family matters. They even took a selfie together, which Colbert posted on his Twitter account.

But as a writer for CNN noticed, it was a far cry from the in-your-face character we're used to seeing on Comedy Central. "Colbert appeared as himself, not as his 'Colbert Report' character. Tuesday's 'Late Show' visit is likely to be the first of many media appearances that introduce the 'real Colbert' to viewers."

But at least one thing stayed the same throughout Colbert's interview — his seemingly genuine praise and admiration for Letterman.

Colbert said several times that he was thrilled to be taking over for Letterman, who's been the "Late Show"'s ringmaster since its debut in 1993. (Via Flickr / Alan Light)

As The Washington Post points out, "It was clear from the beginning of the interview that Colbert hasn't been kidding when he's talked about how Letterman has been his idol since his college days."

And as it turns out, Colbert has some past ties to the "Late Show" as well.

He told Letterman during their sit-down that he had applied to be an intern on the show years ago. He wound up getting an offer, but he turned it down because he said it didn't pay. (Via Wikimedia Commons / David Shankbone)

Well, at least this next gig on the show pays, right? Still no word on exactly when we'll see Colbert officially take over as host.