Steph Curry Gets 'Best Ever' Buzz After Record Showing 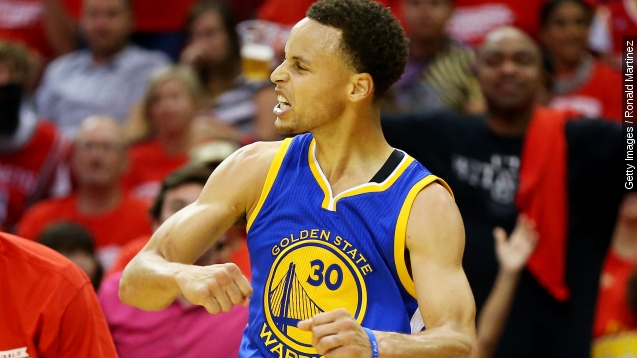 SMS
Steph Curry Gets 'Best Ever' Buzz After Record Showing
By Jay Strubberg
By Jay Strubberg
May 24, 2015
Saturday, Stephen Curry broke Reggie Miller's record for the most three-pointers in a single NBA post-season. Let the "best ever" debate continue.
SHOW TRANSCRIPT

Records are made to be broken — but maybe not if you're Steph Curry after this post-season.

Saturday night, the NBA's Most Valuable Player dropped 40 points in Golden State's 35-point blowout of Houston in a game that made the Rockets pretty much look like the Harlem Globetrotters' opponents.

Per the usual, Curry was a sniper on the court, but this time was extra special.

Curry passed Reggie Miller's mark of 58 three-pointers made in a single NBA post-season, finishing the night with his 64th bucket from downtown.

What's more, it took Miller 22 games during the 2000 playoffs to establish that record.

Bundle that record with an MVP trophy, playoff dominance and a team primed for an NBA title, and you've got "best ever" conversations surfacing once again — this time, with a little more backing. (Video via Unilever)

"Probably the best shooter we've seen together with ball handling skills we've seen in the NBA really ever. The way he has taken over these games, it's like Michael Jordan. It's like Kobe," a Fox Sports analyst said.

"He is absolutely sensational as a shooter. He's the greatest shooter I've ever seen,"  ESPN's Stephen A. Smith said.

"Me too. ... He's the best I've ever seen in my life as well. And, again, he does not miss open shots," ESPN's Mike Greenberg said.

Curry has had such a hot season that fellow NBA greats have also taken notice.

Kobe Bryant even posed this conundrum the day prior to this latest feat. "When the shots u take r the shots the defense wants u to take but r the shots ur comfortable taking #curryriddle" (Video via Nike)

No team in NBA history has ever come back from down 3-0, so unless pigs fly or the Rockets somehow summon the spirit of the 2004 Boston Red Sox, the Warriors are moving on to the NBA Finals.

That means one-half of the "Splash Brothers" will probably send many more threes diving into opposing nets before all is said and done this season.