Stem Cells, Blindness And Why The Media Loves Miracle Cures 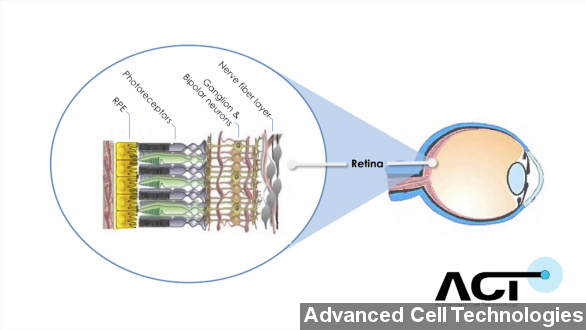 By Sebastian Martinez
October 15, 2014
Scientists researching the safety of stem cells have found the cells can help improve sight in patients with vision impairments.
SHOW TRANSCRIPT

They set out to test the safety of stem cell treatments, but along the way, a group of Massachusetts scientists actually improved the vision of their test patients.

Researchers at Advanced Cell Technologies looked at treatments for two disorders, which involved replacing damaged cells behind the retina with new cells derived from stem cells.

DR. EDDY ANGLADE: "It was essentially beyond our thoughts that we would actually see improvements in visual acuity. ... Importantly, no patient lost vision, and in some cases vision was enhanced."

The paper, published in the medical journal The Lancet, found that 13 of 18 patients saw recovery thanks to the cells and vision-related quality of life improved by up to 25 points in some patients.

The researchers were mainly looking to address concerns that stem cell-derived cells would be rejected by the body's immune system or possibly form tumors or the wrong type of cell. (Video via European Consortium for Stem Cell Research)

None of those things happened, and the biggest takeaway in terms of coverage is the treatment is already being hailed as a potential cure for blindness, among other speculation.

But Dr. Steven Schwartz, one of the lead scientists on the study, told NPR they want to avoid that kind of hype because the treatment is still in such early stages and the sample size is small. "I don't want patients to come in to their doctor saying, 'Hey, I heard about the stem cells on the radio and I'd really like to get that treatment done, and what do you think?' ... It's not ready."

And as The New York Times points out, Dr. Schwartz and his colleague on the study, Dr. Robert Lanza, have reason to be cautious. "[They] were criticized by their colleagues for premature optimism when they published an earlier paper on this study in early 2012, after only two patients had been treated and followed for only a few months."

Still, despite their hesitation, some of the early coverage has looked like this, with banners saying "Stem Cells To Help Blind See Again" not uncommon, despite the fact the treatment is nowhere near ready for the general public. (Video via KHOU)

For its part, the study — which the Massachusetts Institute of Technology says is "the largest, and longest" test of this kind of treatment on humans — won't address those concerns, but it will help settle controversy about stem cell treatment safety.