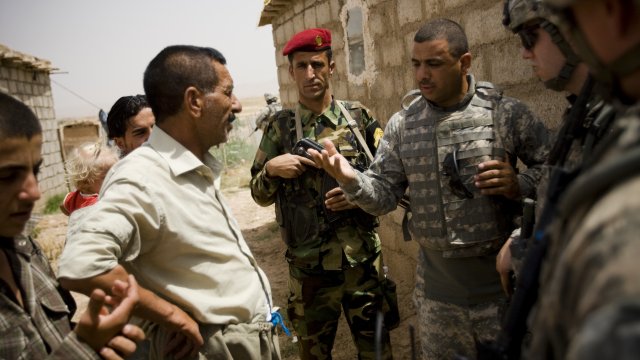 At the height of the wars in Afghanistan and Iraq, U.S. forces recruited civilians there as translators and sources of intelligence.

Their cooperation helped get an upper hand on the Taliban, al Qaeda and ISIS. But it came at a personal cost. Those who helped became targets, their lives in jeopardy for aiding the enemy U.S.

So Congress created the Special Immigrant Visa program in 2008. It worked like this. Afghans and Iraqis who helped U.S. armed forces would get refuge in America. But Newsy found the number of Afghans and Iraqis allowed into the country has dropped sharply.

From more than 4,120 Afghans deemed to have aided the U.S. given special immigrant visas in 2017, to 1,649 last year. The State Department said it is working to speed up longer wait times that contributed to the drop in visas.

The decrease in admissions to the country is more dramatic for Iraqis who no longer have access to special immigrant visas, but who are supposed to get special consideration for refugee status.

Enhanced vetting rules for Iraqis may be one reason for the plunge in refugees, according to a report by the Congressional Research Service.

A statement to us from the State Department did not answer our questions about fewer Iraqis allowed into the country. It said: “We are committed to supporting those who have helped U.S. military and other government personnel perform their duties, often at great personal risk to themselves and their families.”

On Capitol Hill there are concerns the drop in Iraqi and Afghan admissions will discourage future cooperation in the ongoing fight against terror, something they say puts American lives at risk. Members of congress sent a letter to the State Department in March asking about the lower numbers. A response is due at the end of the month.