Steelers DL Will Be Fined $11K For Honoring His Late Father 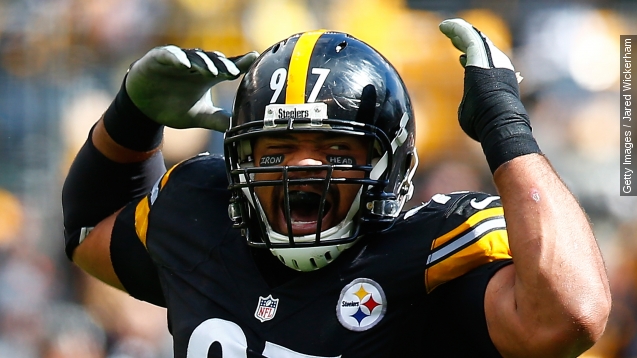 SMS
Steelers DL Will Be Fined $11K For Honoring His Late Father
By Matt Moreno
By Matt Moreno
October 19, 2015
For a second time, Cam Heyward wore eye black with the words "Iron Head" to honor his late father, who died of brain cancer.
SHOW TRANSCRIPT

Heyward once again defied the NFL's uniform policy on Sunday, wearing eye black dedicated to his dad, Craig Heyward, who died in 2012 from cancer.

The eye black, which says "Iron Head," reportedly cost Heyward $5,787 in fines when the league saw it last week.

"That will now cost him, for the second offense on the NFL fine schedule, $11,576. And I say good for you, Cam. Good for you for honoring your late father who was a great player in the NFL," Fox Sports' Mike Pereira said.

A source told NBC Sports the league won't increase the fines past that $11,000 mark and the NFL won't stop Heyward from taking the field.

However, the fines will continue if Heyward keeps defying the league's uniform policy.

The NFL has come under fire these past few weeks for its strict enforcement of uniform rules.

Last week, Heyward's teammate, running back DeAngelo Williams, was told by the league he couldn't wear pink accessories throughout the season to honor his late mother. (Video via Metastatic Breast Cancer Alliance)

This despite Williams being a visible part of the NFL's breast cancer awareness campaign.

"Pink is not a color, it's a culture for me," DeAngelo Williams said in an NFL breast cancer awareness video.

In October, the NFL allows league-approved pink accessories for NFL players, coaches and officials to raise awareness for breast cancer. Outside of that, though, the league doesn't budge.