STD, STI Cases Rise Each Year. Why Isn't The U.S. Making Any Progress? 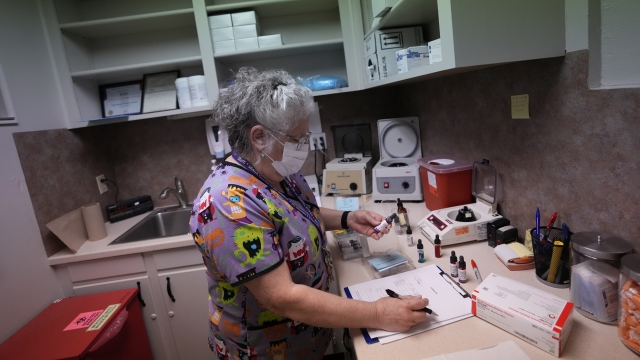 The pandemic might have made rising STD/STI numbers even worse. Health officials have urged action, but prevention efforts have stalled for years.

Public health has been top of mind for many the last couple of years, but there's a public health problem that has largely flown under the radar: a growing rate of sexually transmitted diseases and infections.

The number of STD and STI cases among Americans have been rising steadily each year since 2014. Even the pandemic, which trapped millions inside their homes, didn't really make a dent in those numbers, and it might have made it worse.

These rising numbers have led many health officials to raise an alarm and urge action. Many experts believe one of the causes behind this problem is the lack of knowledge about the basic principles of safe sex, typically taught in sex education classes.

Gaps in sex ed in the U.S. can leave students in the dark, while other countries have programs that positively affect student health and knowledge.

In fact, a Centers for Disease Control survey from 2019 showed that nearly 46% of sexually active high school students did not use a condom the last time they had sex. That's a huge problem considering the fact that out of all new STDs reported to the CDC each year, half were among young people aged 15 to 24.

The numbers show there were 2.4 million cases of chlamydia, gonorrhea and syphilis in 2020, which is the most recent year of data.

Chlamydia is currently the most common STD in the U.S., with 1.6 million cases reported to the CDC that year. While its numbers saw a slight drop from 2016, the CDC notes that the drops are probably not really because of an actual drop in infections. Since chlamydia is usually asymptomatic, case rates are heavily influenced by screening coverage, which the pandemic worsened.

Although overall cases of STDs and STIs fell in the pandemic's early months, the CDC acknowledges that's likely due to the reduced frequency of in-person health care services, resulting in fewer screenings. STD test and lab supply shortages, the diversion of health workers to pandemic response teams, and lapses in health insurance due to unemployment also contributed. Plus, the pandemic came after years of cuts to public health funding.

As anticipated by many experts, numbers picked up again at the end of 2020, with other diseases like gonorrhea and syphilis surpassing 2019 levels, according to CDC data. Preliminary data from 2021 shows there were more than 2.5 million reported cases of chlamydia, gonorrhea and syphilis in that year, meaning STDs and STIs continued to increase during the second year of the pandemic too, with no signs of slowing.

The CDC says it's likely, "...we may never know the full impact of the pandemic on STDs. What is clear, however, is the state of STDs did not improve in the United States. Prevention and control efforts remain as important as ever."

But, the country's prevention and control methods need work. Comprehensive sex ed programs would be a start on prevention among the most commonly affected age group, but robust public testing and information campaigns could help all Americans. Public health funding, however, has faced slashes for years, taking a toll on STD screening and prevention efforts.

"Public funding cuts will prevent the public health system, the safety net, of being able to track down people's partners so that your index patient doesn't get reinfected because their partner was also treated appropriately," said Dr. Anna Maya Powell, co-director of the Johns Hopkins HIV Women's Program. "It's easy to say, 'People should take personal responsibility and come in for care,' but I think the picture is a lot more complex than that."

Only 2.5% of all health spending in the U.S. — which is about $3.8 trillion — is spent on public health and prevention programs. Last year, the Biden administration did announce a $1.13 billion investment to strengthen the disease intervention specialists (DIS) workforce at the CDC, but much of that funding seems to be for the agency's pandemic response.

Still, there's reason for some optimism: There has been progress on STDs and STIs since the HIV/AIDS epidemic of the 1980s and 90s. The STI spread rapidly in the country then, especially among certain groups, like men who have sex with other men.

Years of public information campaigns and research into treatment brought numbers down through the early 2000s and to a stable level by 2013. More recent figures may seem to hint at further progress on the overall HIV cases during the early pandemic, but those figures are also misleading because of the sharp drop in testing.

Plus, many experts have criticized the focus of historic HIV treatment and prevention efforts as largely being focused on treating rich, white, gay men and transgender groups, leaving out many lower-income Americans, people of color and women.

Women in general face a greater burden when it comes to sexual health. Many studies have established that women have a higher biological risk for contracting many STIs and HIV than men, with a higher probability of transmission from men to women.

"Women tend to be more asymptomatic for a lot of a lot of the conditions we're talking about," Dr. Powell said. "Not having symptoms maybe gives people a false sense of security, and then they don't come in to get the routine screening that they might have otherwise if things were open and accessible."

Black women in particular suffer higher numbers of both HIV and other STDs like herpes, and many experts say public prevention efforts have failed to address these groups adequately. Overall, inconsistencies in access to health care and prevention programs across different demographics throughout the country have affected our national battle against STDs and STIs.

"We have had data that shows consistently what we need to be doing in the sexually transmitted infections, those cases in reproductive health," said Dr. Mati Hlatshwayo Davis, director of health for the city of St. Louis, Missouri. "We need to make sure that those policies are as standardized as possible so that they're easily implementable and therefore easy to track data, data that then feeds back into the funding."