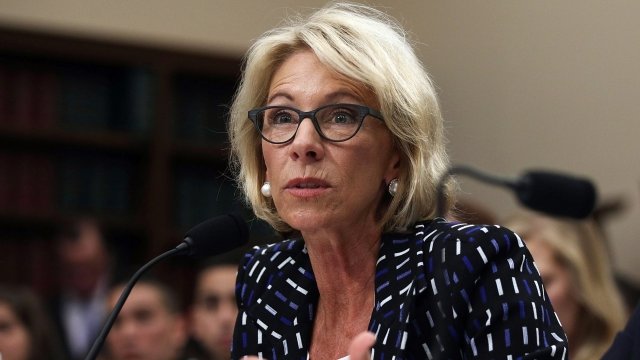 President Obama's administration updated an existing law with the "borrower defense rule." It cancels out some federal loans for students who borrowed money to attend a school with deceptive or illegal practices.

But just before the rule went into effect, DeVos postponed it without hearing from people affected by the change. Now, 18 states and Washington, D.C., are suing to end the delay.

The lawsuit says the Department of Education broke federal rules by pausing the change too quickly and not taking public input or giving enough justification for the pause.

DeVos said the ruling was postponed so the Department of Education could focus on a lawsuit from for-profit colleges pushing back against the rule, but she also has issues with the borrower defense rule herself.

She said the rule "puts taxpayers on the hook for significant costs" and a spokeswoman said it "failed to account for the interests of all stakeholders." The Obama administration estimated the loan relief program would cost about $16.6 billion over the next 10 years.

The Obama administration used existing rules and approved payments for hundreds of millions of dollars for more than 30,000 students, but those claims have reportedly all but stopped being processed since President Trump took office.