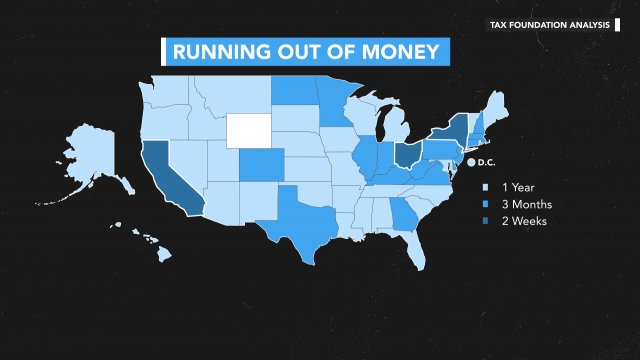 Millions of people now out of work are seeking unemployment benefits, which are paid out of state funds. But with so many people seeking help now, some states could run out of unemployment money within the next few weeks, according to a just released analysis.

"This is an unprecedented crisis," said Jared Walczak, state tax policy director for the nonprofit Tax Foundation. "We have, during really the entire history of the unemployment compensation system, not seen something quite like this."

Turns out, there are no federal requirements for the amount of money states need to keep in their unemployment trust funds. Even before the current crisis, 21 states didn’t have enough cash to meet the recommended levels set by the feds to weather a recession.

"People have lost their jobs in a very short period of time," Walczak said. "The state systems are overloaded. They're having trouble even processing claims, getting the money out the door. But it is overwhelming those systems. It is overwhelming their finances."

The good news: There is a safety net for states who run out of money for unemployment. They can take out interest-free loans from the federal government. The catch: Those loans have to be paid back within two years. The upshot is that the cost of failing to plan in advance will end up coming back to bite taxpayers, businesses and any possible recovery to come.

"This will be difficult for states because as they're growing back, as the revenues are hopefully rebounding, a decent portion of it will be earmarked towards paying off federal loans they're undertaking now. States could have prepared better," said Walczak.