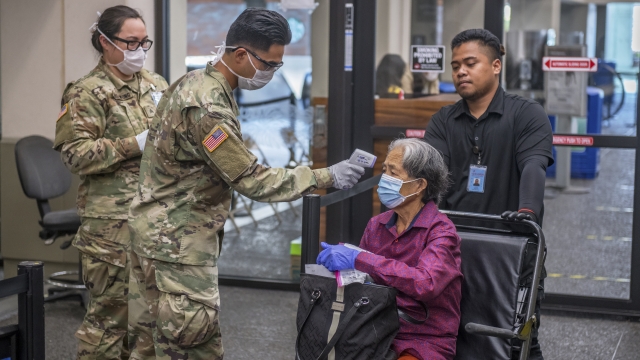 SMS
States Ramp Up Travel Quarantines, Raising Questions About Rights
By LeeAnne Lowry
By LeeAnne Lowry
May 1, 2020
Some states are grappling with balancing public health measures and the right to privacy.
SHOW TRANSCRIPT

In the battle to contain the coronavirus, many U.S. states are ramping up travel restrictions, including mandating quarantines for people coming into the state.

The problem is, states haven't found a good way to actually enforce the quarantines. And their efforts so far have prompted concerns about rights violations.

A state can legally impose a travel quarantine, but when does it cross a line? Let's look at some examples:

First: Rhode Island. In March, its National Guard and police started pulling over vehicles with New York plates and even going door-to-door to inform New Yorkers of the required quarantine. The ACLU of Rhode Island argued that a New York plate isn't enough probable cause to pull someone over. New York threatened to sue, so Rhode Island broadened the policy to require anyone traveling into the state to isolate for two weeks.

Hawaii is another state grappling with enforcing its travel quarantine. In early April, it partnered with a nonprofit to launch a $25,000 program to return visitors to where they came from if they don't have the means to properly quarantine in Hawaii.

The nonprofit's president told The New York Times many people are taking advantage of cheap flights and traveling to Hawaii for vacations despite quarantine orders. Breaking quarantine can result in a fine of up to $5,000. Airport and tourism authorities call hotels to confirm reservations, but beyond that, it's tough to keep track of people.

While the proposals have been heavily criticized as civil rights violations in Hawaii, Kentucky has already ordered ankle monitors for people who have refused to isolate. But that was in the case of people who were sick and continually violated quarantine.