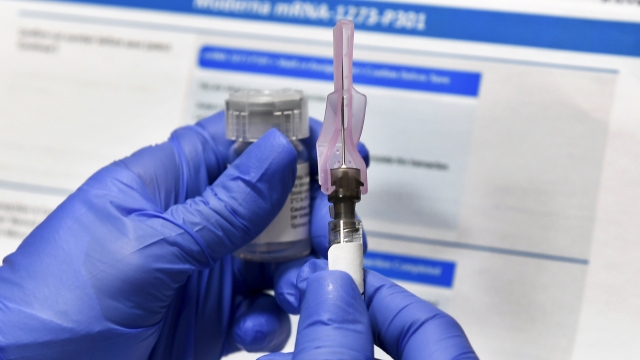 The first shipments of new coronavirus vaccines are set to roll out in roughly one week, but initial supply will be limited.

"Towards the middle and end of December, we will be having available about 40 million doses of vaccines for 20 million people that will be allocated to the states according to population," Dr. Anthony Fauci, the nation's top infectious disease expert, said earlier this month during a conversation with Colorado Gov. Jared Polis.

An advisory panel to the CDC recommended last week that the nation's health care workers and long-term care facility residents get the vaccine first. States don't have to follow the CDC's recommendations, but most probably will.

"I think states, for the most part, will follow those basic prioritization recommendations, but how they actually operationalize may vary a little bit depending on their populations," Marcus Plescia, chief medical officer for the Association of State and Territorial Health Officials, said in an interview with Newsy.

The CDC has provided all U.S. states, territories, localities and tribes with guidance for the first phase of vaccine distribution, but experts say the lack of further information from the federal government — combined with funding shortfalls and outdated technology systems — could leave some states unable to distribute the vaccines when they become available.

"We're at a place where all except some of the most affluent, the richest states, most of them are struggling to get this work done, and so we need another round of funding from the federal government," Plescia explained.

The CDC has given just $200 million to governors and mayors for vaccine preparedness, though it's estimated at least $6 billion to $8 billion is needed.

President-elect Joe Biden has proposed investing $25 billion on "vaccine manufacturing and distribution" to ensure the drug gets to "every American, cost free."

"That'll mean we can really start tracking, as we do in many other sectors. We can track where it's going, who is getting it, who's not, why aren't they getting it," Plescia said. "And that'll allow us to be a lot more sophisticated and effective in how we get the vaccine out, particularly in how we deal with this issue of wanting to be as equitable as possible. Everybody needs to have an equal shot in being able to get the vaccine."

The first shipments of Pfizer's coronavirus vaccine are expected to be delivered on Dec. 15, with Moderna quickly behind it with a Dec. 22 rollout. But those distribution dates depend on when the FDA authorizes each vaccine.

The FDA's vaccines advisory committee will meet Dec. 10 to review Pfizer's data and decide on whether to recommend the agency authorize the vaccine. It will do the same for Moderna Dec. 17.

Both the Pfizer and Moderna vaccines will require two doses.