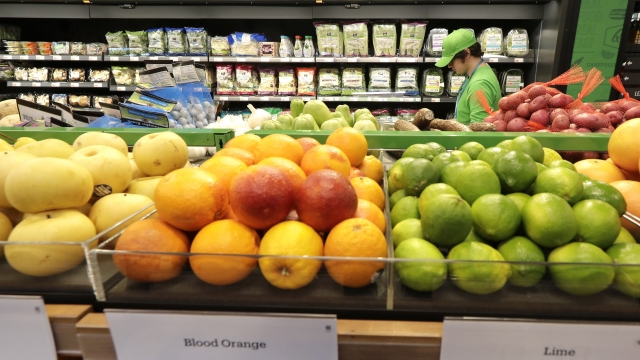 SMS
States Prepare For Stricter Food Stamp Regulations
By Gage Jackson
By Gage Jackson
March 4, 2020
The new rules set to begin on April 1 came from the Trump administration to get able-bodied adults without any dependents off the program.
SHOW TRANSCRIPT

Hundreds of thousands of Americans who rely on federal food stamps are at risk of losing their benefits when new requirements begin on April 1.

The Trump administration's new rules will raise the bar for able-bodied adults using the Supplemental Nutrition Assistance Program, or SNAP.

Currently, those under 50 without dependents who don't meet work, school or job-training requirements can only receive SNAP benefits for three months. But many states with high unemployment have been able to waive those time limits. The new rules will make it harder for those states to extend benefits.

In 2019, more than 34 million people obtained groceries through the SNAP program and it cost taxpayers more than $58 billion. 7% of SNAP participants are considered able-bodied adults without dependents. The Trump administration says getting them off the program will save $5.5 billion over five years.

25-year-old Richard Butler is included in that 7%. He shares a one-bedroom apartment with two others in Chicago and receives $194 each month for groceries and produce.

Butler said, "It means the world to me... We can go without a lot of things, like phones and music. We can't go without eating."

Nine House Democrats sent a letter to President Trump requesting the administration to not make any cuts to the program.

They said, "We are writing today on behalf of the over 36 million American families who currently depend on SNAP, like ours once did, to make ends meet and help the next generation achieve upward mobility."

U.S. Secretary of Agriculture Sonny Perdue counters that with low unemployment nationally "we need everyone who can work to work."

14 states including New York City and the District of Columbia are currently suing the Trump administration, arguing the new rule changes are unlawful.

Additional reporting by Sophia Tareen of the Associated Press.