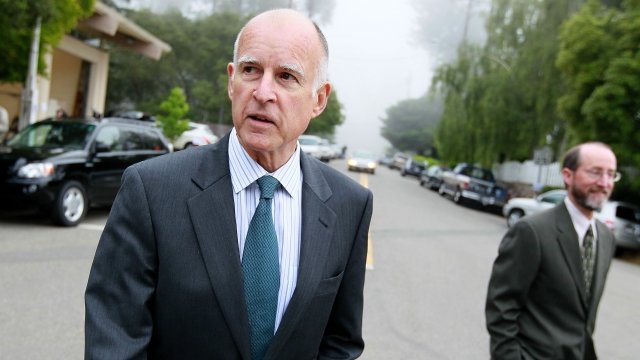 California and nearly 20 other states' attorneys general plan to sue the Trump administration over its proposed plan to freeze vehicle fuel-emission standards.

On Thursday, the National Highway Traffic Safety Administration and the Environmental Protection Agency announced a proposed freeze on national standards at 2020 levels on cars and light trucks through 2026.

That's because the Obama administration enacted stricter fuel efficiency standards to combat climate change. Those standards would also require cars to get increasingly get better gas mileage over time. California was also able to set its own tougher standards, which 12 other states have adopted.

The Trump administration says if fuel efficiency standards are frozen, people will be able to buy newer, safer vehicles that also pollute less. The proposal says a freeze would save up to 1,000 lives per year and help buyers save more than $2,000 per vehicle, though those numbers have been disputed.

The proposal sparked a wave of backlash. Gov. Jerry Brown said in a statement Thursday, "Under [Trump's] reckless scheme, motorists will pay more at the pump, get worse gas mileage and breathe dirtier air."

Pennsylvania Attorney General Josh Shapiro said "it's insane to make cars less efficient," and that the proposal would have a "devastating impact" on public health.

And Massachusetts Attorney General Maura Healey accused the Trump administration of catering to "fuel lobbyists like new EPA Administrator Andrew Wheeler" at the expense of the American people.