States Move To Change Laws On Police Use Of Lethal Force 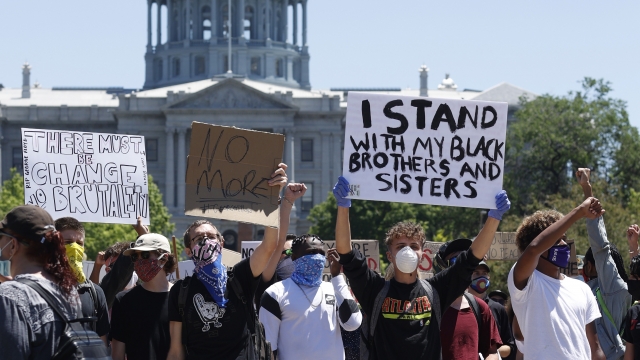 Nationwide protests against police brutality continued this week, and demands for police reform were clear.

But, of course, this isn’t the first time states have felt this pressure. Following a series of high-profile deaths starting in 2014 — Michael Brown in Missouri, Tamir Rice in Ohio and Freddie Gray in Maryland, to name a few. Dozens of states passed new legislation on police reform, but most failed to address a key issue: “police deadly use of force” laws.

They specifically outline when a death at the hands of an on-duty officer is legal.

These laws vary from state to state, so a homicide by police could be considered murder in one state, but justified in another.

And since 2014, only six states have changed their use-of-deadly-force laws.

The least restrictive laws allow officers to use lethal force when there is no immediate threat of serious injury or death. Other states say police can kill civilians only if they believe they are dangerous to officers or others. The most restrictive laws say officers can kill only if it’s necessary.

Most police departments aren’t required to report when they use deadly force. But data that does exist shows just how rare it is for police officers to be convicted or even prosecuted for killing civilians.

According to research organization Mapping Police Violence, at least 7,437 people were killed by on-duty police officers between 2013 and 2019. During that time, 62 officers were charged. Fourteen were convicted of a crime.

“We need change. We need change in the laws and the time for change is now," said state Rep. Joanna E. McClinton of Pennsylvania at a press conference.

Since the death of George Floyd, there’s renewed momentum across the country to change use-of-deadly-force laws, especially in Minnesota, where lawmakers are calling a special session to address reform.

"And so we have laws, quite frankly, that protect bad cops," said state Rep. Rena Moran. "You know, they can justify so easily why they've done what they did. And just get off. And so we really want to try to move legislation that gets to the root causes."

"I have been talking to my colleagues about meaningful policy reform so that no law enforcement officer gets off with killing one of us again," said State Rep. Leslie Herod of Colorado.

But some in law enforcement caution that states may be moving too fast.

"Many of the things in this bill we do here at the sheriff's office," said Sheriff Joe Pelle of Boulder County. "They're trying to do all this in a week and a half. And there'll be some consequences that over time, they'll have to probably be revisited."

But historically, changing use-of-deadly-force laws has been slow. In California, one of the oldest laws on the books, from 1872, was just changed last year.

Today, 11 states haven’t amended their laws in more than 40 years.

"It is really crucial that we are updating our police accountability laws into a 21st-century mindset of where we are and what we want into the future," said Moran.