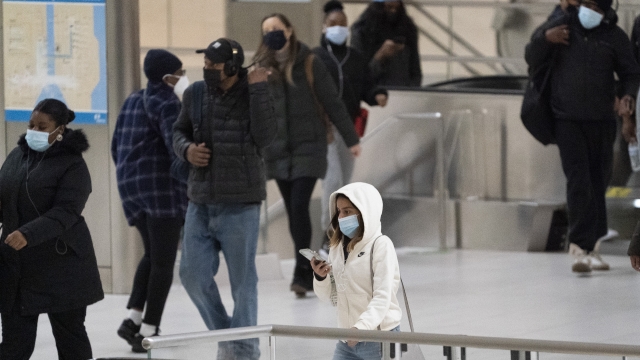 Longtime U.S. Senator from Iowa, Chuck Grassley, will also quarantine after being exposed to the virus...though it's unclear how that happened.

As we've mentioned, Republican Governor Kim Reynolds announced a mask mandate after refusing to enforce one earlier in the pandemic.

Now, Reynolds says people have gotten complacent and that the state's health care system is being "pushed to the brink."

Reynolds said, "If Iowans don't buy into this, we lose. Businesses will close once again. More schools will be forced to go online and our health care system will fail and the cost in human life will be high. So, now the time to come together for the greater good."

President Trump has been quiet about the accelerating caseload. He's resisting the transition of power while spreading misinformation in a long-shot effort to overturn the election's outcome. And this could hamper the response effort from the incoming Biden administration.

Gogu continued, "So vital that there's coordination between these two administrations. If you look at the Biden transition team and what they're going to have to take over we're probably going to see, by the time Biden takes over, well over 200,000 case as day, probably even 2,000 deaths a day. I hope not to see that, but that's what Biden's going to have to take into account."

A Trump administration official said 20 million vaccine doses could be ready by next month.

And Dr. Anthony Fauci says a vaccine could be widely available by Spring. But Dr. Gogu tells me we're two months behind in the fight against COVID.

Gogu said, "We should have a plan for distribution already right now and the fact that there is no plan for that and we're trying to come up with a plan when we have the vaccine that's probably going to get emergency use authorization in the next few weeks is just so frustrating as a physician to see that."