Federal Funds Coming For Red Flag Laws: What The Laws Do 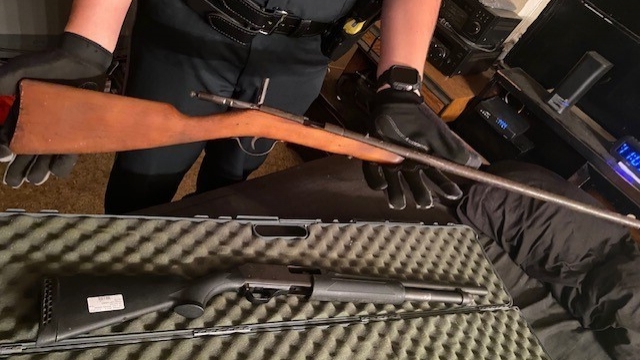 A Newsy investigation examines how red flag laws work and why hundreds of people are being told to give up their guns.

An 18-year-old with several swastikas and a school kill list on his bedroom wall was prohibited from possessing firearms after the Denver Police Department petitioned in June for an Extreme Risk Protection Order (ERPO) under Colorado’s red flag law.

The same department filed for another ERPO in June in the case of a 31-year-old man after they said he called the Adams County Courthouse in Brighton, Colorado, to threaten a “mass shooting.” The man even showed up at the building, they said, with a paintball pistol “that was made to look like an actual sidearm.”

In an August case, a man carrying an “AK Rifle” and a machete slung around his body — and saying he suffered from a mental health disability — threatened to burn down a pawn shop if he was not able to retrieve guns he had pawned there. Police successfully petitioned for an ERPO that would prohibit him from accessing firearms for at least a year.

These are only a few examples of how the Denver Police Department used the state’s red flag law to prohibit someone from possessing firearms. Under the law, a judge can grant an Extreme Risk Protection Order, which temporarily blocks possession of firearms if the judge believes a person poses a danger to themselves or others.

Officers petitioned the court for the civil orders in each of the cases, saying the subject posed “a significant risk of causing personal injury to self or others” if they possessed a gun. And in each case, a judge agreed.

“I’d be naïve if I thought that this is going to stop every single incident,” said Joe Montoya, the chief of the investigations division at the Denver Police Department, which is the agency to which judges granted the most ERPOs in Colorado last year. “What I can say is you will never know how many we stopped because they never got to that point,” Montoya said.

This fall more states could begin working toward enacting similar laws when they can apply for millions of dollars in federal grant funding. This is all made possible by the Bipartisan Safer Communities Act, which President Biden signed into law this summer.

According to Sheila Jerusalem, a Department of Justice spokesperson, the Bureau of Justice Assistance will issue a “solicitation” this fall alerting states about the requirements for applying for a piece of the FY22 Byrne State Crisis Intervention Formula Program funding that was included in the law.

Jerusalem could not say exactly how much funding would be allocated , but according to an August White House briefing, “The Bipartisan Safer Communities Act includes $750 million for states to implement crisis interventions such as (Extreme Risk Protection Orders).”

A Newsy evaluation of Colorado's ERPO petitions in 2021 found judges granted ERPOs in 60 distinct cases in the state. The Douglas County Sheriff's Office had the second-most orders granted of any police agency, with four.

Thirteen individual citizens who were not representing police departments also successfully petitioned for ERPOs. In Colorado, a family member or a household member can file for an ERPO if they meet certain criteria, such as related by blood, marriage or adoption.

A Newsy analysis of the Denver Police Department cases found 83% of respondents struggled with alcohol or substance abuse; 56% made suicidal remarks; and 39% threatened to kill someone else.

For example, Maryland provided records to Newsy showing judges granted 363 final orders in 2021. A Maryland courts spokesperson could not confirm whether this number included multiple orders related to the same case or person. Oregon courts approved 112 petitions. New York issued final orders of protection for 218 people. And Connecticut approved 210. In Florida, law enforcement petitioned for more 1,717 risk protection orders in 2021; however, data provided to the state did not make it clear how many orders judges actually granted.

"There's tremendous variation within the states with regard to how they're being used," said Shannon Frattaroli, a professor at Johns Hopkins University Bloomberg School of Public Health.

Frattaroli, who conducts research at the university's Center for Gun Violence Solutions, said she is currently engaged in a six-state study that includes California, Colorado, Connecticut, Florida, Maryland and Washington.

"Implementation matters," she said. "In order for ERPO laws to be able to prevent mass shootings, suicide, interpersonal violence, they need to be used. And we know from the descriptive work that we've done that they simply are not being used at all in some jurisdictions and that they're being underutilized in other jurisdictions because the infrastructure – the investment — just hasn't been made yet."

In Colorado, the attorney general's office has been "focused on investing in law enforcement training and how and when to use Extreme Risk Protection Orders," said spokesperson Lawrence Pacheco.

Pacheco said his office had partnered with the University of Colorado School of Medicine to apply for a $250,000 grant from the Fund for a Safer Future, a group of foundations and donors working to reduce gun violence, to create a "scientifically-validated curriculum targeted at law enforcement on how and when to use ERPOs."

In New Mexico, Gov. Michelle Lujan Grisham, a Democrat, recently established a task force "dedicated to the coordination and promotion of the Extreme Risk Firearm Protection Order," according to an August press release.

At the time, only 11 Extreme Risk Firearm Protection Orders had been issued since the law was enacted in 2020.

"The task force will focus on developing and disseminating recommended training materials and protocols on the use of ERFPO for relevant parties across the state, including law enforcement, the judiciary, school officials, and behavioral health providers," the press release said.

And a Republican Pennsylvania legislator was invited by the White House to discuss with several other lawmakers "efforts to bring extreme risk protection orders to Pennsylvania," and other places, according to an August press release from the Pennsylvania House Republican Caucus.

"It was helpful to hear from legislators in Florida and Maryland about the experiences where ERPOs have been implemented, and also from other states where legislation is pending, to brainstorm on how to help advance extreme risk protection orders in Pennsylvania," Rep. Todd Stephens said.

Pennsylvania does not currently have a comparable ERPO law, but Stephens introduced related legislation for consideration in September 2021.

Data shows that most mass killers are men. Meanwhile, victims are nearly equal between men and women.

What are the specifics of these cases?

Newsy received access to ERPO petitions through the civil court systems in Colorado and Florida, and the documents show why someone can be forced to relinquish weapons — and why a petition might be denied.

In a case last year, the Alamosa Police Department petitioned for an ERPO after learning a 19-year-old who worked at a sporting goods store had been seen pretending to "clear hallways" with a rifle and had talked "a lot about school shootings (and) dropped out of school because he would shoot it up," according to court paperwork. The judge granted the ERPO.

A law enforcement tipster said the teen would talk about how he "understood why people shot people because he could hurt people."

But many cases involve suicidal individuals.

The Grand Junction Police Department, for example, petitioned for an ERPO after it responded to a call about a "suicidal person."

According to court records, the man told police that "he has recently had suicidal thoughts and ideations, purchased a 9 mm handgun and stated multiple times he thought about shooting himself." That ERPO was also granted.

Critics have expressed concerns, however, that the laws may inconveniently and unnecessarily impact some citizens.

In Florida, for example, the Winter Haven Police Department filed a petition for a risk protection order after responding to a verbal altercation between two neighbors.

According to police documents, a pair of young men said they were using a BB gun to shoot at palm rats in a tree on their property when a 70-year-old neighbor who was walking his dog expressed concern that they were shooting at him.

The men who were shooting the BB gun accused the concerned man, Mark Quackenbush, of threatening them by saying, "We can exchange live fire."

Police said the two men took that statement as Quackenbush threatening to shoot them with a firearm.

Quackenbush denied making any threats or having any guns or ammunition in his possession.

However, the police officer who responded to the scene said he petitioned for a risk protection order "based on the statements."

While a judge granted a temporary order, the court denied the petition for a final risk protection order two weeks later.

"I didn't have any weapon other than a leash in my hand with my service dog," said Quackenbush.

Quackenbush said he hired his own attorney to fight the issue in court.

"It goes against the citizens," he said of the risk protection order. "It is set in place for the law enforcement to go after anybody they want to go after."