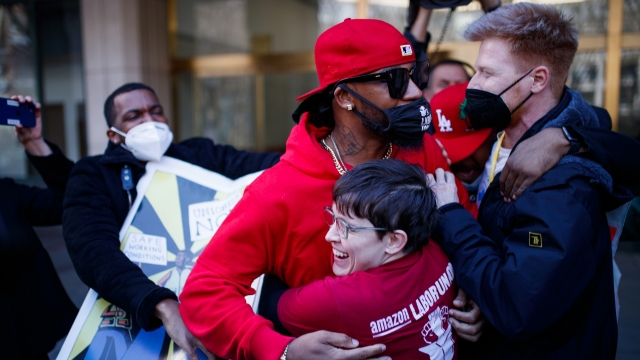 SMS
Staten Island Amazon Workers Vote To Form Company's First Union
By Isbella Diaz
By Isbella Diaz
April 1, 2022
The vote is being called one of the most significant pro-labor votes in a generation, with potential ripple effects on warehouses across the country.

Change is coming to at least one Amazon warehouse.

In a historic first for Amazon — one of the largest private employers in the country — workers in Staten Island voted to unionize.

"This is a prime example of what the power that people have when they come together," Amazon Labor Union President Chris Smalls said.

The vote is being called one of the most significant pro-labor votes in a generation, with potential ripple effects on Amazon warehouses across the nation.

The margin in Staten Island was wider than most had anticipated. More than 2,600 workers voted yes, with some 2,100 rejecting the union.

The moment comes after 2-years of COVID-fueled demands from workers in Staten Island for better conditions. That's when now-former Amazon employee Chris Smalls led the walkout, calling for better safety inside the facility. Amazon fired him.

"There's a lot of different issues to talk about when it comes to Amazon," he said. "But I can tell you what, Amazon doesn't become Amazon without the people. And we make Amazon what it is."

The Amazon Labor Union's demands include better pay — starting at $30 an hour — an end to most mandatory overtime and more paid time off, including sick leave.

In the lead up to the vote, Amazon launched an anti-union campaign, including mandatory meetings and a website that discouraged workers from supporting the effort.

And Amazon was accused of illegal union busting with some instances shared by the labor union and not independently confirmed by Newsy.

Organzers in Bessemer, Alabama say they faced similar pushback from Amazon. A vote to unionize there appears to have fallen just short, though the counting of ballots is still underway.

Amazon had been watching this vote closely. Pro-union advocates say one warehouse voting to unionize could inspire other workers to do the same. Amazon has 1.1 million employees across nearly every state.

Meanwhile in Staten Island, union organizers are celebrating a victory that was a long time coming with the power of a 1.6 trillion dollar company trying to stop them.