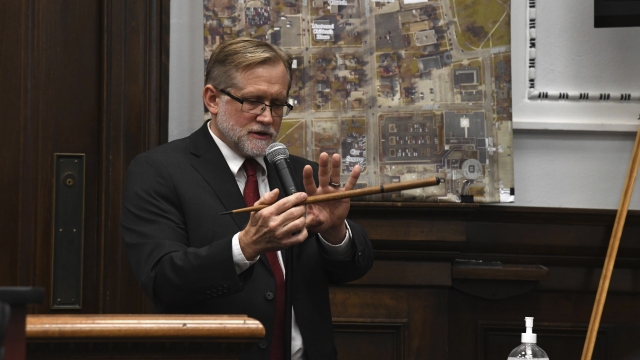 "There was the mark where Joe had been laying and I put my hand in it and my hand was wet with his blood. And that's again, when I collapsed on the ground," Joseph Rosenbaum's fiance, Kariann Swart, said.

One of the men killed was Rosenbaum, who was shot four times at close range.

DEFENSE ATTORNEY MARK RICHARDS: "So that hand was over the barrel of Mr. Rittenhouse's gun when his hand was shot?"

What's in question is why Rittenhouse opened fire and whether Rosenbaum was trying to take away his weapon.

"I think it was very clear to me that he was reaching specifically for the weapon, because that's where his hands went," said Richie McGinniss, a video director for the conservative website The Daily Caller.

Rittenhouse doesn't dispute that he shot two men to death – and injured a third – during protests in Kenosha, Wisconsin last year.

The prosecution says he was the aggressor.

The defense says he was defending himself and that this all began because he didn't want his gun taken away amid the chaotic scene.

RITTENHOUSE ATTORNEY COREY CHIRAFASI: "He wasn't using his firearm in a way to scare or intimidate people by pointing it at them? Agreed?"

Several witnesses – called by the prosecution – actually appeared to bolster Rittenhouse's defense, including the sole survivor.

CHIRAFASI: "It wasn't until you pointed your gun at him, advanced on him with you gun, now with your hands down pointed at him that he fired, right?"

CHIRAFASI: "You had said that you were looking for a non-lethal way to end this interaction."

GROSSKREUTZ: "That is correct, yes."

CHIRAFASI: "Yet you pulled your gun out and began, I'm going to use the word chase. You began chasing or running after a man who was running away from you. Correct?"

GROSSKREUTZ: "That is correct."

The next phase of the trial has already begun, with the defense laying out its case.

If convicted, the now 18-year-old Rittenhouse faces life in prison.