President Trump To Give State Of The Union Address Next Week 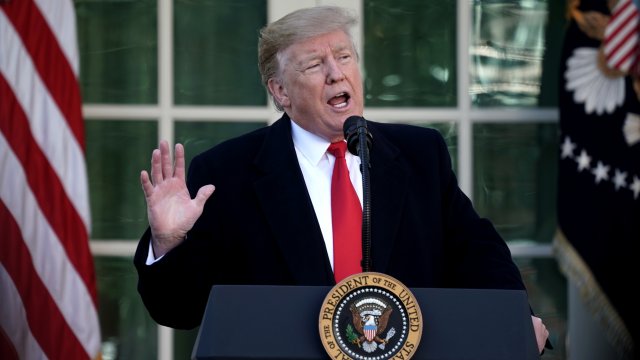 SMS
President Trump To Give State Of The Union Address Next Week
By Ahmed Jawadi
By Ahmed Jawadi
January 28, 2019
​Both the president and House Speaker Nancy Pelosi agreed on the date.
SHOW TRANSCRIPT

President Donald Trump will give the State of the Union address on Feb. 5.

In a letter sent Monday, House Speaker Nancy Pelosi invited the president to deliver the address next Tuesday after both parties agreed on the date. Trump quickly accepted the invitation, saying, "We have a great story to tell and yet, great goals to achieve!"

President Trump was originally supposed to deliver the speech on Jan. 29, but House Speaker Pelosi would not let him do so in the House Chamber until the government was reopened. The Trump administration initially considered holding the speech at a different venue, but the president later tweeted that he'd decided against that.

Last Friday night, the president signed a bill to fund the government for three weeks, putting a temporary end to the shutdown. But a spokesman for Pelosi told USA Today last week, "It's not happening on 1/29."

The partial government shutdown began in late December when Democrats refused to approve the billions of dollars in border wall funding President Trump demanded. It was the longest shutdown in U.S. history.