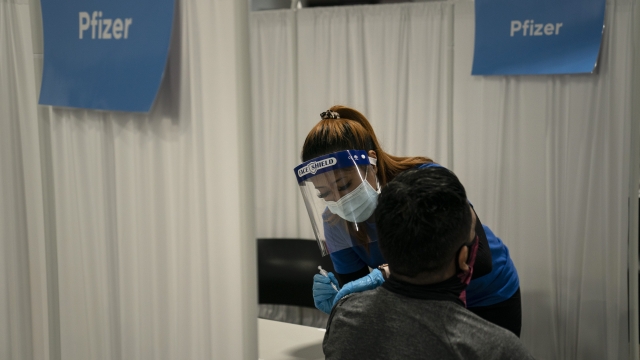 Colorado's governor is pushing boosters for all.

Colorado is on a list with California, New Mexico and Arkansas — cutting their own path, despite federal guidance that only has boosters available for select populations.

"We want you to get the booster," Arkansas Gov. Asa Hutchinson said.

"I just think the more people we can target with the vaccination, the better off we will be in reducing the infection rate," Colorado Health Center leader Jeri Ajayi said.

The CDC says 1.7 million kids under 12 have at least one shot.

In Arkansas, one of the states expanding booster eligibility, the state's secretary of health says there's a new trend this year: kids spreading COVID to each other in school.

"That is a product of not having those children immunized and relaxing the mask mandates or the mask requirements," Hutchinson said. "This is not a benign disease, this is not as mild as the flu as people have been giving the misinformation to say, this can have very significant consequences, hospitalizations and deaths."

Now, Pfizer is asking the FDA to give its experimental coronavirus treatment pill the go-ahead, hoping its treatment can prevent mild cases from getting worse. It joins a similar treatment from Merck, which is already under the FDA's microscope.

But as U.S. cases of the coronavirus trend back up, now north of 83,000 cases a day on average, and cold weather pushes people back indoors, it's clear the U.S. has the tools. It's just a question of whether we can — or will — use them.

"We're better positioned because of our higher vaccination rate, but there's still a lot of unvaccinated folks here," Polis said.