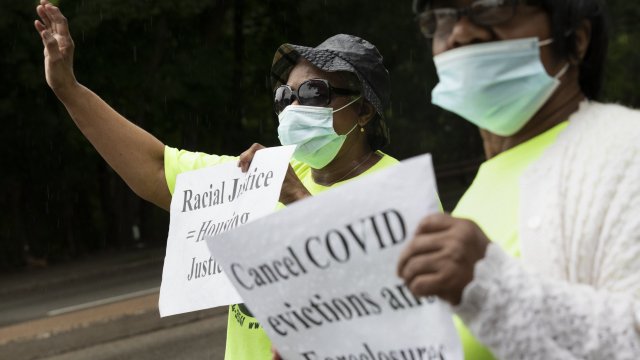 One housing expert says of the looming number of evictions due to the economic impact of the coronavirus, "We are tremendously concerned."

Millions of Americans are at risk of eviction if they can’t make rent next month, as moratoriums put in place amid the pandemic expire across the country. To get an idea of what that could lead to, we turn to one state in particular: Virginia.

“I suffer from PTSD from being in Iraq, so it can really put your mind in some areas that you don’t want to go to when you’re considering being evicted from where you live at and lived for six years because of a situation that you have actually no control over,” said Terry Bostick.

Terry Bostick is a small business owner who’s lived in the same Richmond apartment for the past six years. The COVID-19 pandemic completely upended his income, making it difficult to pay bills and leading to an eviction notice — something he says he's seen a lot of recently.

“I talk to tenants all the time. You can see the notes on people’s doors,” Bostick said.

The Supreme Court of Virginia lifted the state’s moratorium on evictions, paving the way for them to resume this week. Bostick’s court date is now less than a month away, and he’s not sure what he’ll do if he’s ordered to leave.

The temporary suspension on evictions ends July 25. Millions of people are still unemployed.

“I’ve thought about at least having enough money to put my stuff in storage and just kind of go from there,” Bostick said.

Virginia has five of the top ten U.S. cities with the highest eviction rates, with Richmond in the second spot. But it’s a critical issue facing the entire country.  A new poll from Newsy and Ipsos shows that 33 percent of Americans have had a harder time paying for housing since the pandemic began. And 49 percent now feel worse about their financial situation.

“We won’t see the cascade or tsunami of evictions we’re expecting for another week or two, but we are tremendously concerned,” said Heather Crislip, president and CEO of Housing Opportunities Made Equal of Virginia.

Richmond Mayor Levar Stoney recently announced the city will use $6 million of the $20.1 million it received from the federal CARES Act to provide rent assistance and fund an eviction diversion program. But Crislip fears it won’t be enough.

“I know that program can be effective. I am concerned that the amount of resources we have just will not meet the need,” Crislip said.

As eviction courts reopen across the country, the unemployment rate still sits near 15 percent.  But experts were concerned about looming evictions long before the pandemic began.

“There is a fundamental mismatch in the amount of affordable housing that’s available in the city of Richmond but also nationally and the incomes that people are making,” Crislip said.