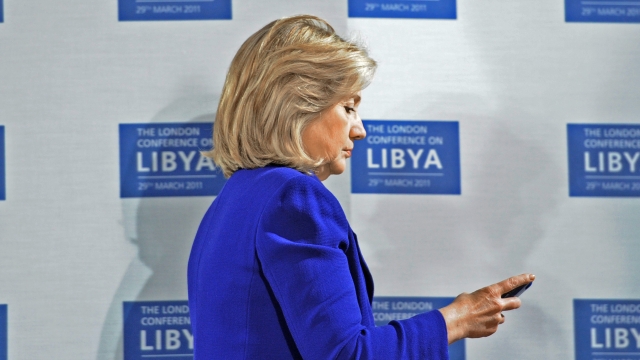 Hillary Clinton just got a big finger wag from the U.S. State Department about her use of a personal email while she was secretary of state. In a report leaked Wednesday, the inspector general says she failed to get approval to use a private server.

That part isn't a big surprise, Clinton has already said she never asked anyone for permission. At a debate in March, she said: "There was no permission to be asked. It had been done by my predecessors. It was permitted. I didn't have to ask anyone."

The State Department seems to sort of agree with Clinton. A spokesman said Wednesday, "While not necessarily encouraged, there was no prohibition on using personal email."

But the real focus of the new report is on Clinton's compliance with public record laws. The investigation was requested by current Secretary of State John Kerry and looked at record-keeping policies and practices at the State Department. Kerry and the most recent secretaries of state except Clinton all agreed to be interviewed for the investigation.

The IG says, "Clinton should have surrendered all emails dealing with Department business before leaving government service." That's the compliance issue. Clinton eventually handed over emails but that was almost two years after leaving office, which "mitigated" that issue.

And Clinton's not the only one who's mentioned for record-keeping practices. Colin Powell is criticized in pretty similar language, but the IG stresses the situations are different because a lot had changed between Powell's and Clinton's tenures. The IG says "the Department's guidance was considerably more detailed and more sophisticated" when Clinton took office.

Though the report focuses many of its pages on Clinton and contradicts her campaign's explanation of events a bit, it concludes, "Longstanding systemic weaknesses related to electronic record and communications ... go well beyond the tenure of any one Secretary of State."

The biggest consequences that come from the report are going to be political. Donald Trump has already hit Clinton on the report, saying, "She's as crooked as they come." It feeds into the narrative that Clinton is untrustworthy and basically does whatever she wants to do.