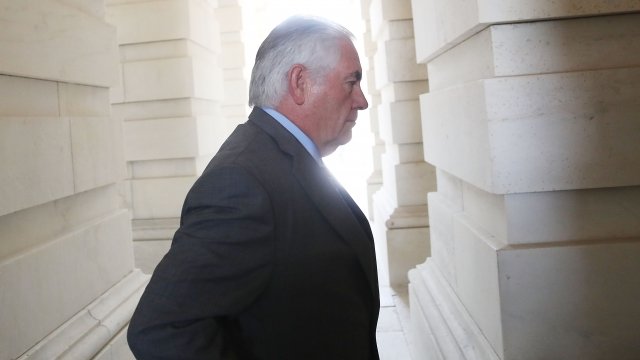 By Eugene Daniels
August 2, 2017
And it's furthering the rift between Tillerson and career diplomats.
SHOW TRANSCRIPT

Secretaries of state typically don't turn down money from Congress. But Rex Tillerson hasn't yet tapped into about $80 million set aside to help fight propaganda from ISIS and quash misinformation from countries like Russia, China and North Korea.

Politico spoke with current and former State Department officials who say Tillerson is ignoring career diplomats who are asking for the money — money that's already accounted for. Tillerson could request some $60 million from the Defense Department; legislation set that cash aside and OK'd for it to be sent to the State Department. And another $19.8 million is ready to go to the Global Engagement Center, which counters online propaganda and misinformation.

So what's the holdup? It's not completely clear, but officials at State are blaming the Russian government. They say the State Department's R.C. Hammond suggested "any extra funding for programs to counter Russian media influence would anger Moscow" at a time when the U.S. still seems interested in working with Russian President Vladimir Putin on Syria and on fighting ISIS.

But Hammond is blaming career diplomats for not having a vision. He told Politico: "They put in a request in (sic) for additional funding. We asked them to map out a plan of how they would spend the money." But some officials deny that.

Beyond the back and forth, what we do know is U.S. President Donald Trump has said he wants to slash the State Department's budget, and overall, he hasn't focused on diplomacy all that much. The slow moving of the money could just be how Tillerson operates. He's known to be very methodical when making decisions, likely a product of his engineering background.

But Tillerson might be running out of time. That $60 million from the Defense Department could expire by Sept. 30 if he doesn't request a transfer.