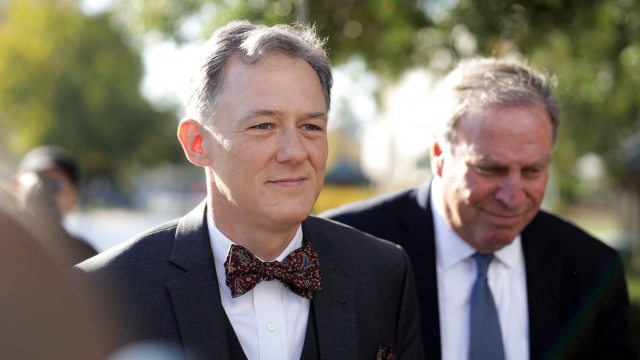 On Wednesday, two witnesses will testify publicly before the House Intelligence Committee as part of the impeachment inquiry into President Donald Trump. One of those witnesses is senior State Department official George Kent.

As Deputy Assistant Secretary for European and Eurasian affairs, Kent oversees U.S. policy toward half a dozen countries. One of which is Ukraine.

Last week, the House released Kent's closed door deposition on the Trump administration’s actions leading up to the Ukraine investigation.

In his October testimony, Kent took aim at President Trump's personal attorney, Rudy Giuliani, for his "campaign of lies" against former U.S. Ambassador to Ukraine Marie Yovanovitch. Yovanovitch was ousted by the State Department in May after Giuliani and a handful of Republicans convinced the administration she was critical of President Trump.

Kent's testimony was also critical of the U.S. Ambassador to the European Union Gordon Sondland, Energy Secretary Rick Perry and special envoy to Ukraine Kurt Volker. All of whom, Kent says, declared they were in charge of Ukraine policy following a White House meeting in May.

Kent told lawmakers that following the election of Ukrainian President Volodymyr Zelenskyy, "they felt they had the mandate to take the lead on coordinating efforts to engage the new Ukrainian leadership," and that by June, "engagement with Ukraine shifted into, shall we say, unusual channels."

These revelations from Kent’s closed door deposition echo that of Bill Taylor, a former U.S. Ambassador to Ukraine and now the top diplomat at the U.S. embassy in Kiev. Earlier this fall, Taylor told the House committee about an "irregular channel" of policy control involving Sondland, Perry and Volker.

Kent said he had previously expressed concern over former Vice President Joe Biden's son's position on the board of the Ukrainian energy company, Burisma.

Kent told lawmakers, "I raised my concerns that I had heard that Hunter Biden was on the board of [a Ukrainian Gas company] that could create the perception of a conflict of interest." He added, "the message that I recall hearing back was the vice president’s son Beau was dying of cancer and that there was no further bandwidth to deal with family related issues at that time."

Kent, who has been with the State Department since 1992, will join Taylor to publicly testify Wednesday. Yovanovitch will testify Friday.