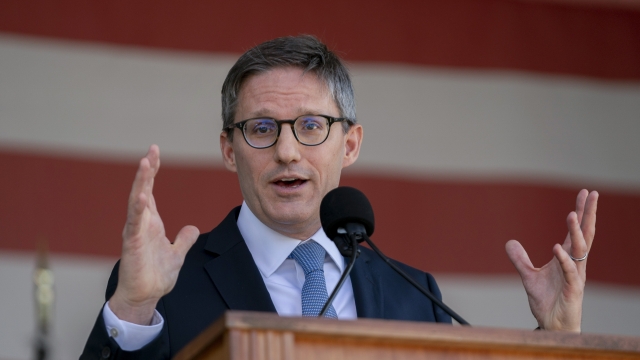 A top adviser to Secretary of State Antony Blinken talks about the war in Ukraine, and the likely resolution.

Derek Chollet is beginning his third decade in the federal government with an international crisis that the U.S. is trying to contain in Ukraine. He’s a top adviser to Secretary of State Antony Blinken. And in the department’s Hall of Flags, he talked about the war and hope for its end nine months in and nearly $19 billion in U.S. security assistance later.

NEWSY'S SASHA INGBER: What will incentivize [Vladimir Putin] to stop the war in Ukraine?

DEREK CHOLLET: I can't get in Putin's head. That's probably the last place I want to be. But what I can say is we are sending a clear message to Putin.

He called Putin "self-defeating" and "reckless," but stopped short of calling him a "terrorist." He admitted Russia is terrorizing innocent Ukrainians by hitting civilian targets, and on Tuesday — trying to take out the country’s electrical grid in what the Pentagon calls "likely the largest wave of missiles" since Putin’s war began. But Chollet says the U.S. can’t sever ties with Russia.

"The U.S. and Russia both have thousands of nuclear weapons and we have an interest in reducing the number of those nuclear weapons and ensuring that those are safely secured. And so that's something that we will continue to talk to Russia about," said Chollet.

"This is a very difficult time. It's going to be many challenges ahead, but I am confident that over time Ukraine will prevail and Russia will pay the price of what has been a huge mistake for Vladimir Putin," said Chollet.

And amid it all, a stark assessment from top U.S. General Mark Milley. He says despite recent successes, Ukraine isn’t likely to expel Russians from the whole country anytime soon.