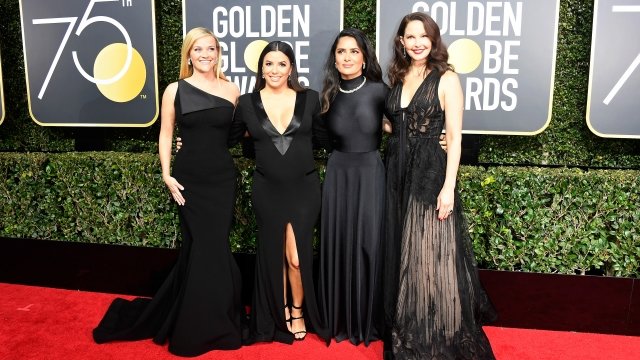 Stars wore black ensembles to the Golden Globes Sunday to protest sexual misconduct and gender inequality in the workplace.

The red carpet at the 2018 Golden Globe Awards was draped in black as most actresses and actors used their attire to make a statement about social issues.

Besides wearing black to protest sexual misconduct in Hollywood, stars also brought attention to gender inequality in the workplace.

And instead of asking actresses what designer they were wearing, TV hosts asked why they chose to wear the dark hue.

"It isn't just about us; on this carpet in this moment, we are here standing in solidarity with women everywhere," Rachel Brosnahan, the star of "The Marvelous Mrs. Maisel," told CNN.

Some stars were also seen wearing Time's Up pins in support of an anti-sexual harassment and assault initiative organized by women in the industry.

Prior to Sunday's award show, the campaign reached its $15 million goal for its legal defense fund, which will provide financial support to people fighting back against sexual misconduct and discrimination.