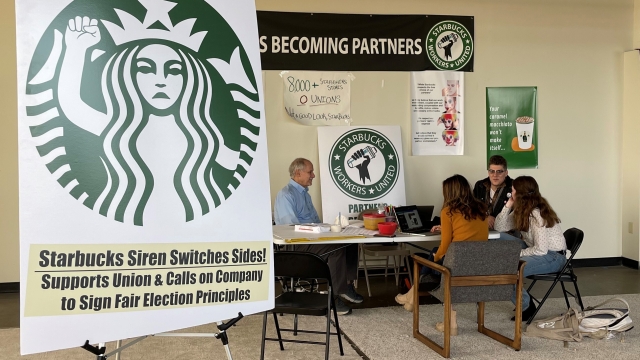 Workers hoping to unionize Starbucks stores in the U.S. have won a preliminary victory before the National Labor Relations Board.

The board said employees at three separate Starbucks stores in Buffalo, New York, can hold union elections in November in a new ruling. The board rejected Starbucks' attempt to hold a single vote with 20 stores in the region.

If the effort is successful, the stores would be the first of Starbucks’ 8,000 company-owned U.S. stores to unionize. The Seattle coffee giant opposes the unionization effort.

Starbucks said Thursday evening that it had just received the ruling and was evaluating its options. The company reported record fiscal fourth quarter revenue of $8.1 billion earlier Thursday and had announced a $1 billion effort to raise U.S. workers' pay.

The NLRB said the union elections will be held by mail-in ballot between Nov. 10 and Dec. 8. The NLRB will count the ballots on Dec. 9. There are about 128 employees at the three stores that will vote, according to the NLRB decision.