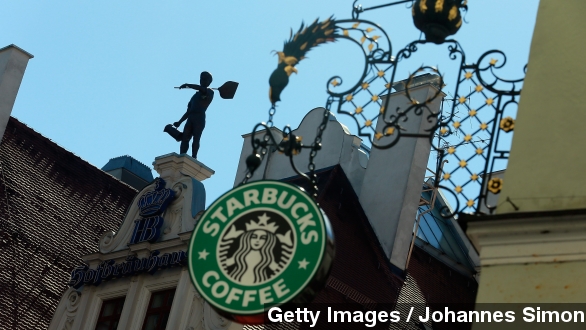 When you're in a rush, at the airport or just jonesing for some pumpkin spice, you probably turn to Starbucks.

But for an artisanal coffee served up by a hipster barista, you've got to turn to a boutique, right?

Starbucks opened its Reserve Roastery and Tasting Room in Seattle as the flagship in a new chain of high-end coffee boutiques aimed at aficionados and selling rare coffees that cost upward of $45 per pound.  (Video via The New York Times)

"When we started thinking about this facility and what we were going to build, somehow I found myself writing about Willy Wonka. And what I wanted to do was create magic and fun," Schultz said.

But in addition to fun and games, the new boutiques are also about profit.

The popularity of home brewing systems like Keurig have put pressure on Starbucks' bottom line at the same time that the U.S. coffee market appears to have stagnated. (Video via Keurig)

As one analyst told The New York Times, "If you look at coffee imports over all for the last several years, it looks like a pretty mature market. ... There's been a roller coaster in terms of price, but in terms of volumes, we're talking about very modest growth."

And those are the kind of market conditions where companies look to grab upscale niches, and the coffee market already appeared to be heading in that direction.

As Businessweek noted, Blue Bottle Coffee based in Oakland, California, has raised more than $45 million in venture capital since 2012, a sign that investors believe the upscale coffee market has strong potential. (Video via Ten Speed Press)

Boutique stores are just one way Starbucks is looking to boost its revenues.

In an effort to double food sales over the next five years, the company announced it was expanding its menu to include evening snacks and even alcohol in thousands of its stores around the U.S.

And earlier this year it began experimenting with mobile payments with the goal of streamlining the sale process. (Video via CNN)

But as Starbucks expands its purse, you might need to guard yours. A single cup of coffee at the high-end stores will cost between $4 and $7.